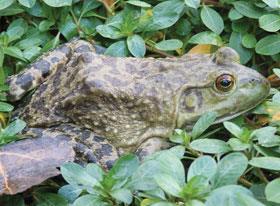 Scientists based in France have used DNA profiling to trace the path of the American bullfrog as it invades wetlands - saving on the costly, time-consuming business of sending volunteers out into the field to track the animal.

DNA scans have been used to map the presence of microorganisms before - but never an animal as big as a frog.

Pierre Taberlet, of the Laboratory of Alpine Ecology in Grenoble, and colleagues publishing in  Biology Letters  (DOI: 10.1098/rsbl.2008.0118), designed primers that would amplify short, 79-base-pair fragments of the bullfrog’s mitochondrial DNA. They successfully amplified bullfrog DNA from all of nine wetland sites where the species had been spotted, and found no bullfrog DNA in three ponds where the invaders hadn’t been seen. It’s not known how soon the DNA breaks down into fragments that are no longer recognisable as bullfrog, but it’s likely to be more than a week, estimates Taberlet. The general method could be used to spot all manner of species,
he hopes.

More to catalysis than meets the eye

Catalysts are more than just a reactive surface: what’s beneath their skin can completely change the course of a reaction. Publishing in Science(2008, 320, 86, DOI: 10.1126/science.1155200), Detre Teschner at the Fritz-Haber-Institute, Berlin, and colleagues have revealed that the outcome of the industrial palladium-catalysed hydrogenation of alkynes to form alkenes depends on the presence of subsurface hydrogen.

Using in situ spectroscopic techniques to study the palladium catalyst during reaction, Teschner found that at first the alkene products are further fragmented, as energetic hydrogen atoms seep out from subsurface sites and add unselectively to alkenes as well as to alkynes. But carbon fragments soon displace the subsurface hydrogen, and the catalyst starts to selectively form alkenes.

’We believe this shows that in many cases it’s not enough to investigate just the surface of a catalyst - in this case, the very selectivity is defined by the subsurface,’ says Teschner.

Astronomers have found methane on a planet outside our solar system for the first time. The researchers used the Hubble Space Telescope and a near-infrared spectrometer to find the spectral signature of methane - and to confirm an earlier sighting of water vapour - on a planet about the size of Jupiter, 63 light years away from the Earth. At a scorching 900?C, the planet is too hot to support liquid water or life.

’This is a crucial stepping stone to eventually characterising prebiotic molecules on planets where life could exist,’ said Mark Swain, of Nasa’s Jet Propulsion Laboratory, Pasadena, US, who led the research published in Nature(2008, 452, 329, DOI:10.1038/nature06823).

The UK pharmaceutical industry is expecting to cut jobs and investment in R&D following a slump in confidence in the UK market, a survey by the Association of the British Pharmaceutical Industry (ABPI) and the Confederation of British Industry (CBI) suggested.

Over a third of the 101 UK-based pharmaceutical companies questioned in the survey said they were expecting to reduce investment in R&D (currently nearly ?4 billion a year). 42 per cent predicted a fall in manufacturing, and almost half expected to reduce the number of clinical trials they conducted in the UK. Uncertainty over the ongoing renegotiation of the UK’s drug pricing system (Chemistry World, April 2008, p18) might be partly responsible, the
ABPI suggested.

How plants shudder at shade

An international team of scientists has worked out how plants left in the shade by competitors’ leaves rapidly synthesise the growth hormone auxin to fuel a desperate growth spurt for sunlight.

The so-called ’shade avoidance response’ is triggered by particular wavelengths of red to far-red light, created after sunlight filters through the leaves of competing plants. Joanne Chory, of the Salk Institute for Biological Studies in La Jolla, California, and colleagues publishing in Cell  (DOI: 10.1016/j.cell.2008.01.049), have mapped out a shade-triggered molecular pathway for auxin biosynthesis in the model plant Arabidopsis thaliana.

The auxin is transferred to the plant’s stem, encouraging the growth of spindly shoots which farmers don’t want. ’Suppressing the shade avoidance reaction in crops may allow us to increase biomass and seed yield,’ says Chory - though the idea is speculative for the moment.

The UK’s Engineering and Physical Sciences Research Council (EPSRC) says it anticipates cutting its funds for blue skies research (or ’investigator-led funding’) by 12 to 15 per cent, or around ?120 million, over 2008-11.

In a review of its funding priorities and plans for the next three years, the research council confirmed it would also cut the overall volume of research and training it could support by
3-5 per cent, as previously reported (Chemistry World, March 2008, p8).

Though the EPSRC’s budget will increase by 18.6 per cent up to 2010-11, funding for basic research is under strain for two reasons. Some of the research council’s budget has been earmarked for specific cross-council research programmes to address government priorities such as energy and ageing. And much of the budget increase is eaten up by the EPSRC’s commitment to ’full economic costing’, where all research councils will increase - sometimes double - the size of individual grants they give to universities, to help cover the costs of maintaining labs, equipment and infrastructure. 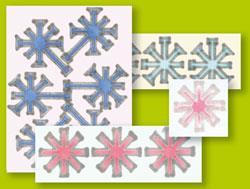 Star-shaped channels printed over a 100cm2 area of pape

Cheap microfluidic devices can be produced with paper, a desktop plotter, and a cheap organic polymer, US-based chemists have reported. Publishing in Analytical Chemistry  (DOI: 10.1021/ac702605a), Derek Bruzewicz and colleagues from Harvard University, Massachusetts, printed a mixture of polydimethylsiloxane (PDMS) and hexane in channel shapes onto paper, using modified pens attached to a plotter. The polymer penetrates the paper, creating hydrophobic walls that aqueous solutions can’t cross. The paper can be folded, to be dipped in to solutions, without disrupting the flexible channel walls.

The team tested their hand-held microfluidics devices with various colorimetric assays for detecting glucose and proteins. They hope the cheap method will allow any laboratory to make paper microfluidic systems for diagnostics or analysis - useful where high-tech equivalents are too expensive.

The benefits of cancer drugs could be over-estimated by trials that are halted early, according to scientists reporting in the Annals of Oncology(DOI:10.1093/annonc/mdn042). Giovanni Apolone at the Mario Negri Institute for Pharmacological Research in Milan, Italy, and colleagues examined 25 cancer trials stopped early between 1997 and 2007. In more than three-quarters of cases, the data were used within three years to apply for approval of the drug from regulatory agencies.

The team suggests commercial pressures cause companies to stop trials when drugs are showing benefit, in order to save time and gain early access to the market. Truncated trials cannot measure the long-term effects of treatments, the researchers point out, and could miss other outcomes, including adverse side effects.

High-resolution monitoring of carbon dioxide emissions from fossil fuels has uncovered that emissions are greater in the south-eastern US than previously thought. The conclusion comes from the three-year Vulcan project, a mapping system that tracks CO2 emissions every hour at around 10 kilometre resolution across the US. Researchers at Purdue University, funded by Nasa and the US Department of Energy, work out CO2 levels by number-crunching government-tracked data on local air pollution.

Project leader Kevin Gurney said the detailed maps gave policy-makers a ’scalpel’ with which to track CO2 emissions, rather than a ’big blunt tool to bang the US economy with’. Interactive maps and data are available at  Purdue website.