Caterpillars and related bugs can fight off insect predators by vomiting a surfactant solution over unwitting attackers, scientists have found.

Grazing insects have long been known to defend themselves against attackers by regurgitating fluid - but the repellent effect had always been attributed to toxins in the liquid that the insects had taken up by eating poison-producing plants.

However, not all plants produce such toxins, so scientists at University of W?rzburg, Germany, decided to test the theory that insects must have developed their own defence mechanisms, independent of their plant host.

The team found that toxin-free oral secretions were enough to fend off predatory ants, because the fluid contains a complex mixture of surfactants. Whereas pure water just rolls off the ant’s hydrophobic cuticle, adding surfactants ensures the liquid coats the ant - which then drops the caterpillar to clean itself.

The exact make-up of the surfactant mixture is still to be determined, but a range of peptides are involved, say the team, publishing in  Proceedings of the Royal Society B (DOI: 10.1098/rspb.2008.1281).

After five months searching the arctic plains of Mars for evidence of water, NASA’s Phoenix lander has stopped communicating with Earth. The lander’s solar-powered batteries ran flat as winter arrived and cut the hours of daylight. During its mission, Phoenix provided plenty of evidence that water once flowed on Mars (see Chemistry World  , August 2008, p9), suggesting that the plant could once have supported life.

Phoenix may now be lost, but NASA continues to receive data from its Mars Reconnaissance Orbiter. On 28 October NASA revealed that the orbiter had found hydrated silica - opal - across large swathes of the planet. This relatively young mineral shows that water may have flowed on Mars just 2 billion years ago - a billion years later than previously thought.

Could this be the ultimate iPod accessory? Scientists in China have developed nanotube loudspeakers that can be made into transparent films - and then attached one to the screen of an iPod to play songs from the device. The films can be made into any shape or size, and applied to any electrically insulating surface - even flexible fabrics.

Where conventional loudspeakers work by vibrating to produce sound waves in the surrounding air, the nanotube speakers use heat. Applying an electric current, the tubes very quickly get hot - expanding the air around them to create sound waves. The findings are published in Nano Letters  (DOI: 10.1021/nl802750z).

A new anti-reflective coating could dramatically enhance the amount of sunlight absorbed by solar cells, say US scientists. A team at Rensselaer Polytechnic Institute have developed a nanoengineered coating that increases the amount of sunlight absorbed by silicon solar cells from 67 per cent to over 92 per cent. The group claim the coating is effective across virtually the entire solar spectrum, from UV to infrared.

The coating consists of seven 50 to 100nm layers of silicon dioxide and titanium dioxide nanorods, which act as a dense forest to prevent light from escaping. The coating also ensures the panel absorbs light from almost any angle, avoiding the need for costly mechanisation to track the sun through the day. The study is published in Optics Letters   (DOI: 10.1364/OL.33.002527).

Good news from the sirtuin family - the group of drugs that mimic resveratrol, the molecule believed to be behind the health benefits of a regular glass of red wine. Scientists publishing in Cell Metabolism  (DOI: 10.1016/j.cmet.2008.08.017) have shown that sirtuin SRT1720 can prevent weight gain in mice given a high fat diet, while boosting their athletic performance at the same time. Related compounds are already being tested in humans.

Resveratrol is thought to trick the body into thinking it’s short of calories, switching on the burning of stored body fat. The compound hits the SIRT1 receptor, which the sirtuins also target but with far higher affinity. SRT1720 - developed by Sirtris Pharmaceutical, which was bought by GSK in June - has already shown promise against type 2 diabetes.

The commission’s 12 November report highlights that nanoparticles haven’t been shown to harm health or the environment - but that testing has been limited. Nanosilver, carbon nanotubes and C60 were all singled out as potentially harmful. ’In the longer term, we are concerned that more sophisticated third and fourth generation nanoproducts may be even more difficult to capture in a regulatory system primarily focused on the bulk chemical properties of a material,’ the commission stated.

Meanwhile, in a bid to end apparent industry confusion, the US Environmental Protection Agency has restated its position on carbon nanotubes, confirming that they are chemically distinct from other forms of carbon, and must be treated separatelyunder the Toxic Substances Control Act.

Austrian researchers were surprised to discover that ripe bananas glow bright blue under ultraviolet light - with the intensity of the blue glow peaking at the point that the fruit is perfect to eat. 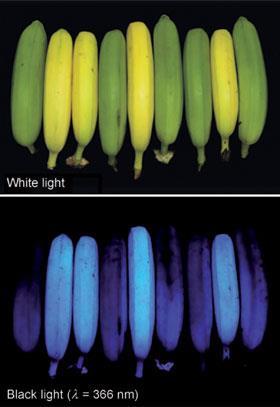 Could ripe bananas be the new nightclub glow stick?

The team made their colourful discovery while using high performance liquid chromatography (HPLC) to look for yellow-tinged chemicals in banana skins. The fluorescence, which has not been observed in any other plants or fruits, appears to come from chlorophyllbreakdown products - including some unique to bananas. The team published their discovery in Angewandte Chemie (DOI: 10.1002/anie.200803189).

A US team have developed a set of equations that should allow scientists to design the ultimate unwettable surfaces - and have used them to make ’omniphobic’ materials impervious both to water and alkanes. While water-repelling materials are well known, few of these are also resistant to low surface tension liquids such as oil and alkanes.

Publishing in Proceedings of the National Academy of Sciences USA  (DOI: 10.1073/pnas.0804872105), the group used their design rules to show that existing materials could also be made omniphobic. By adjusting the surface chemistry of water-resistant duck feathers - by dipping them into a solution of fluorodecyl POSS, a microfibre with very low surface energy - the feathers also became resistant to oil.

Atrazine, one of the world’s most widely-used herbicides, makes frogs more susceptible to disease by compromising their immune system, US scientists suggest. Their study adds to evidence linking the herbicide to the startling global decline in amphibian populations.

The team - publishing in  Nature  (DOI: 10.1038/nature07281) - studied the declining leopard frog. The researchers found that atrazine and phosphate levels were the best predictors of parastic flatworm infection in the frogs - which can cause malformed limbs, and death.

Atrazine was banned by the EU in 2004, but it is still commonly used in the US. In 2006, the country’s Environmental Protection Agency concluded there was not enough evidence to suggest the chemical was
harmful to humans.