Italian chemists have developed a gentle polymer-based cleaning system to remove residues from the surface of valuable works of art. The gel has been used to brighten up 500-year-old artwork darkened by aged varnish or oxidised polymeric coatings, which were applied during earlier attempts to protect them. 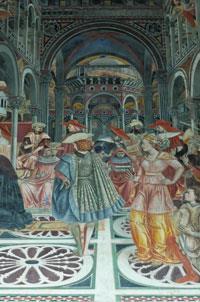 ’The problem is that many paintings are porous, so they will absorb any conventional solvents, which can cause damage,’ says Piero Baglioni, who led the research at the University of Florence. The cleaner is made from a small amount of p  -xylene dissolved in water and then thickened into a gel with hydroxyethylcellulose. This microstructure of tiny droplets of oil-coated water trapped inside cellulose chains can dissolve organic polymers such as polyvinyl acetate on the surface, without penetrating into the rest of the painting.

Publishing in Angewandte Chemie International Edition  (DOI: 10.1002/anie.200904244), the team report that the gel has already been used to treat 15th century wall paintings at the Santa Maria
della Scala museum in Siena and a 18th century gilded frame.

Legislation aimed at bolstering security at US chemical manufacturing facilities, to prevent their misuse by terrorists, has been passed by the House of Representatives.

This law, if passed by the Senate, will authorise the regulation of security practices at any chemical sites deemed vulnerable to terrorist attacks. Facilities will be expected to take measures such as securing their perimeters, having visible security personnel and taking action to avoid internal sabotage.

Universities and schools, considered less of a risk as they store smaller amounts of chemicals, will have a separate set of procedures.

’The [legislation] will reduce the risk that chemicals used by our own chemical facilities are turned against us through terrorist attack,’ said Henry Waxman, chairman of the House of Representatives Energy and Commerce Committee, after the act was passed on 6 November.

Russian president Dmitry Medvedev has announced that his government will invest 318 billion roubles (?6.6 billion) in projects to commercialise nanotechnology over the next six years. The funds will be managed by Rusnano, a state-owned venture capital firm set up in 2007, which has already selected 36 projects to receive initial funding.

The move aims to establish a self-supporting high-tech industry by 2015 to reduce the country’s reliance on oil and gas exports. However, the transformation will require training thousands of skilled personnel, and hence significant investment in education and basic research. Therefore the government has set up a new national research centre for nuclear physics and nanotechnology, coordinated by the Kurchatov institute in Moscow.

New crystalline compounds could yield better materials for fuel cell applications, according to Canadian scientists. The researchers made conducting metal organic frameworks (MOFs) and showed they could be used to create the membranes that separate the gases in a proton exchange membrane fuel cell at high temperatures.

The team led by George Shimizu at the University of Calgary have used a honeycomb-structured organosulfonate MOF as a proton conducting membrane that works above 100?C, an efficient operating temperature for a fuel cell.

Publishing in Nature Chemistry   (DOI: 10.1038/nchem.402), the team found that when loaded with water, the MOF conducts at low temperatures, but if triazole molecules were put in the pores it has superior transport properties. Shimizu admits however that conduction is still at least an order of magnitude lower than it needs to be for practical application.

A cheap polymer-based material that can change from clear to multicoloured to opaque black at the flick of a switch has been designed by US scientists. The electrochromic material could find use in multicoloured information displays, electronic books and colour-changing mirrors, they say.

Materials that can change colour in response to electrical signals, have previously come with a high price tag and limited range of available colours. Publishing in  Chemistry of Materials  (DOI: 10.1021/cm902069k), the team at the University of Florida claim to have overcome previous problems by using thin layers of three different 3,4-propylenedioxythiophene-based polymers sprayed onto glass slides. When an electrical charge is passed through the layers, the polymers are reversibly oxidised and reduced - meaning they can change colour on demand.

In their 21 October report, it was requested that the government fund scientific research into improving crops and sustainable crop management to the tune of ?200 million per year for the next 10 years in order to meet the predicted 50 per cent increase in global food demand by 2050. The report also stated that research into new genetically modified crop varieties should be supported, to develop plants that are resistant to drought, can grow in high salinity soil or in areas polluted by heavy metals.

A  new way of making a class of non-natural amino acids that are widely used as components of pharmaceuticals and chiral catalysts has been developed. The researchers claim their method is scalable and offers a more economical and environmentally friendly approach to synthesising these molecules.

The Strecker synthesis - the reaction of an imine or imine equivalent with hydrogen cyanide, followed by nitrile hydrolysis - is a standard method to produce  a -amino acids. However, it has remained a challenge to produce enantiomerically pure amino acids on a large scale.

Now, US researchers at Harvard University have added a twist to this standard method by identifying a simple chiral urea-derived catalyst to control the key hydrocyanation step. The findings are published in Nature  (DOI: 10.1038/nature08484).

The global warming potential of methane could be drastically increased by complex interactions with other atmospheric aerosols, such as dust, salt and soot, claim US scientists.

Computer models carried out at Columbia University suggest that the impact of these gas-aerosol interactions has not been given sufficient weighting in the relative scale of pollutant’s global warming power used by the International Panel on Climate Change (IPCC) to govern emissions trading. 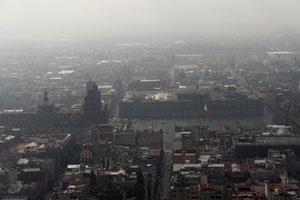 A number of unexpected interactions were found, including that methane can soak up hydroxyl radicals that would otherwise convert sulfur dioxide into cooling sulfate aerosols.

Publishing in Science  (DOI: 10.1126/science.1174760), the team admit that their model does not take all the possible interactions into account but says that their findings suggest that these interactions should be included in calculations used to determine both short- and long-term climate policy.

Two metals are better than one

UK chemists have developed reagents that can metallate cyclic ethers and ethene at room temperature without them disintegrating. Using combinations of zinc and alkali metals the team made stable, crystalline complexes with carbon-zinc bonds that can then be used in further reactions.

Cyclic ethers such as tetrahydrofuran decompose very readily when reacted with lithium reagents, and organozinc compounds are not strong enough bases to metallate such compounds directly. However, combining them with alkali metal reagents greatly increases their metallating power. By metallating with a bimetallic base system, the team formed stable, crystalline molecules with strong Zn-C bonds. The alkali metal also plays a supporting role in stabilising the complexes. The work is reported in Science  (DOI: 10.1126/science.1178165).