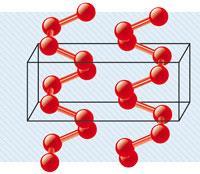 At high pressures, molecular oxygen forms a structure that is a square spiral chain with four oxygen atoms per turn, according to computational results published in Proceedings of the National Academy of Sciences, USA (2012, DOI: 10.1073/pnas.1119375109).

Using the crystal structure analysis by particle-swarm optimisation (Calypso) method, researchers at the University of Changchun, China, and the Carnegie Institution of Washington, US, calculated high pressure structures of oxygen up to 2TPa, where they found the stable spiral structure (pictured).

The structure is the same as one of the high pressure forms of sulfur, known as S-III. It is the first monatomic form of oxygen, where the basic building block of the solid is the single oxygen atom rather than diatomic oxygen.

Interestingly, unlike the lower pressure forms of oxygen, this new structure is predicted to be an insulator rather than a superconductor, which goes against the conventional wisdom that materials metallicise at high pressures. Instead, a band gap is predicted to be formed due to sp3-like hybridisation of orbitals and the localisation of electrons, stabilising the polymeric form.

Confirming the existence of this state experimentally is the next step.

Andre Geim and Kostya Novoselov of the University of Manchester, UK, who were awarded the 2010 Nobel prize in physics for their work on graphene, have been knighted in the New Year’s honours list. Venki Ramakrishnan of the MRC Laboratory of Molecular Biology, Cambridge, UK, who shared the 2009 chemistry Nobel for his work on the ribosome, was also knighted.

The chief executive of GlaxoSmithKline was similarly honoured and president of the RSC, David Phillips, was upgraded from OBE to CBE.

The US Environmental Protection Agency’s (EPA) chief scientific adviser and research head, Paul Anastas, is leaving the agency after two years. The green chemistry pioneer will be returning to his research position at Yale University, US, in mid-February.

Anastas spent his tenure reforming the agency’s work assessing individual chemicals and trying to direct research towards a more holistic view of sustainability, as can be seen from his recent article in Environmental Science and Technology (2012, DOI: 10.1021/es203881e) where he outlines the significant changes made to the EPA’s research enterprise since 2010. His sucessor is yet to be announced.

Radical reactions are challenging to study at cold temperatures, but an international team of researchers has recently clocked the rates of reaction between atomic nitrogen and hydroxyl radicals at 56K. The results correct the model for molecular nitrogen formation in space.

The team cooled atomic nitrogen, H2O2 and a buffer gas by passing them through small nozzles, similar to those used on space shuttle booster rockets. The nozzles converted the thermal energy of the gas into kinetic energy, effectively cooling it. In the reactor, a UV laser split the H2O2 into OH, and the OH reacted with the N to form NO and H. The NO then reacted with N to form N2 and O. These reactions are important as they are thought to generate the bulk of the molecular nitrogen in dark, dense interstellar clouds.

Two more lasers provoked fluorescence from the OH and NO molecules, tracking their abundance. The disappearance of OH gave a rough measure of the rate constant for the first reaction, while the production and then consumption of NO gave the difference in the two reaction rates. Because the team already knew the rate of the second reaction, they could calculate the rate of the first - and their rate constants were lower than previous measurements. The team claim this method should work for other radical species, paving the way for future cold reaction studies with astrochemical implications.

Funding falls for teaching and research

UCU said that this highlighted a retreat from public investment in higher education in England, and that the government was ’passing the buck’ for funding universities to the student.

Sally Hunt, UCU general secretary, who described the reforms as ’regressive’ said ’these plans will put at risk decades of progress in opening up access to education and will endanger the health of the sector. You cannot maintain a world-class university system in the 21st century by turning the clock back to the 1900s and before. Our universities are a public good that currently generate billions for economy, why put that at risk by starving institutions of public funds and forcing students to foot the bill?’

A form of carbon nanotubes have been shown to exhibit colour properties similar to semiconducting particles, despite themselves being metallic, say Rice University, US, researchers in the Journal of the American Chemical Society (2011, DOI: 10.1021/ja209333m).

The size dependant colours of suspended colloidal particles have been a topic of fascination for years, from stained glass windows to quantum dots. Suspensions of metallic particles give different colours based on plasmonic resonance, while for suspensions of semiconductors, the key parameter is the band gap between HOMO and LUMO, which is subtly changed by size.

A new family of oxime compounds can cross the blood brain barrier of mice and protect them from nerve agents such as sarin, say researchers. Currently, the compound that soldiers carry for nerve gas treatment, pralidoxime, cannot pass through the blood brain barrier - as it is positively charged because of a quaternary amine group. This means pralidoxime can’t undo any central nervous system problems related to nerve gas exposure.

The new compounds, published in Journal of Medicinal Chemistry  (2011, DOI: 10.1021/jm201364d), replace this amine with a neutral amidine, allowing them to pass through to the brain.

The molecules have been shown to protect mice from lethal doses of a sarin mimic; next is to see if the compounds also protect against other organophosphate agents that work in the same way.

The spectra of biological samples probed by NMR are often swamped by a few strong signals, but a new method can now suppress these, by amplifying them. The counterintuitive technique is published in Analytical Chemistry  (2011, DOI: 10.1021/ac202548n) and has been dubbed ’add to subtract’ by the researchers at Purdue University, US.

By scaling up the peaks of unwanted signals, such as glucose, and then subtracting them from the spiked sample, the scientists create a clean spectrum without compromising resolution or accuracy. The technique has been shown to work with actual biological samples, revealing several amino acids that were undetectable before.

Arctic biting back over mercury

A method for accurately measuring mercury levels in the Arctic has been developed by European scientists. Mercury has a tendency to accumulate in organisms and increase in concentration up through the food chain, so monitoring its levels in the environment is important. In previous investigations, polar bear organs - such as the liver, kidney, hair and blood - have been analysed for mercury content, but the results can be inaccurate because soft tissues change throughout the lifetime of the animal.

Now, Aurore Aubail from the National Environmental Research Institute, Denmark, and colleagues from France and Norway, have investigated the temporal trends of mercury using polar bear teeth. Contrary to soft tissues, the tooth is not remodelled throughout its life and the mercury is not remobilised.

The team collected teeth samples from 87 polar bear skulls from the Natural History Museum at the University of Oslo, Norway. They analysed mercury concentrations by solid sample atomic absorption spectrophotometry and the relative abundance of carbon (13C/12C) and nitrogen (15N/14N) stable isotopes using an isotope-ratio mass spectrometer to provide information about potential changes in feeding habits or habitats for polar bears.

The results, published in the Journal of Environmental Monitoring (2011, DOI: 10.1039/c1em10681c), show that there has been an overall decrease in mercury concentrations in the Arctic over the last 50 years, which supports earlier findings. The results from the stable isotope ratios eliminated variations in the feeding or foraging habits as a potential explanation. As the mercury emissions are not sourced from the Arctic, another possible cause is a decrease in the source of the mercury emissions from Europe and North America.

Arctic biting back over mercury pollution