A trace metal is the limiting factor restricting nitrogen uptake in tropical rainforests, US scientists have shown. The team found levels of molybdenum - rather than phosphorus, as was previously believed - limits nitrogen uptake, and ultimately the forest’s growth.

Tropical rainforests get most of their nitrogen from soil bacteria that turn atmospheric nitrogen into biologically usable ammonium. Previous research suggested phosphorus was the controlling factor in nitrogen uptake, but the Princeton researchers suggest these findings were skewed by trace molybdenum impurities found in phosphorus fertiliser.

Reporting in Nature Geoscience  (DOI: 10.1038/NGEO366), the team showed that adding molybdenum to soil samples greatly increased the rate of nitrogen fixation. In contrast, adding molybdenum-free phosphorus fertiliser did not affect the rate of nitrogen fixation at all. Molybdenum is known to be a cofactor in nitrogenase, the main nitrogen-fixing enzyme.

The findings may also impact on climate change studies. Models indicate that the future ability of tropical forests to soak up carbon dioxide as levels of the greenhouse gas rise will be dictated by the amount of nitrogen available
to them.

The UK has become the world’s first country to set legally binding targets for cutting greenhouse gas emissions. The climate change bill - given royal assent on 26 November 2008 - commits the UK to carbon cuts of 80 per cent (based on 1990 levels) by 2050.

The government’s new climate change committee advises that the key to achieving this cut is de-carbonising electricity generation, by a combination of renewables, nuclear, and carbon capture and storage. This clean electricity could then be used to heat homes and power cars.

Meanwhile, as Chemistry World  went to press, negotiators gathered for United Nations talks in Poznan, Poland, to discuss an international climate deal to replace the Kyoto protocol. However, the current talks aren’t expected to produce any breakthroughs, as the world waits for US president-elect Barack Obama to take office. Obama has already promised to dramatically reduce the country’s carbon emissions.

Nasa’s Mars science laboratory will not be ready in time for its scheduled launch date of October 2009, the US space agency has revealed - and the next suitable launch window doesn’t arrive until autumn 2011.

The mission involves sending an advance rover to the red planet to study its early environmental history. The car-sized rover will be able to travel longer distances over rougher terrain than predecessors such as Phoenix. On board will be a range of instruments including x-ray spectrometers, gas chromatography-mass spectrometers, and the ’ChemCam’ - a laser that can vapourise and then analyse rocks and soils at distances of up to nine meters.

Carbon dioxide is a pollutant

he US Environmental Protection Agency (EPA) must take into account greenhouse gas emissions when issuing permits for new coal-fired power stations, the agency’s own environmental appeals board has ruled.

The appeal was brought by US environmental group the Sierra Club, which argued that the EPA must regulate CO2 under the clean air act, following a 2007 decision by the Supreme Court that the gas constitutes an air pollutant.

The specific case appealed by Sierra Club relates to a 100MW coal-fired power station proposed to be built in Utah, for which the EPA issued a permit during 2007 without considering CO2 emissions. However, the ruling is likely to disrupt the tens of permit applications EPA is currently considering for coal-fired plants.

US scientists have engineered a strain of  E. coli  able to produce long-chain alcohols that would be suitable as fuels. Publishing in  Proceedings of the National Academy of Sciences  (DOI: 10.1073/pnas.0807157106), the team from the University of California produced alcohols six to eight carbons long - compounds never produced naturally within the biosphere.

The Los Angeles-based group have previously hijacked a bacteria’s biosynthetic machinery to make shorter chain alcohols (Chemistry World  , February 2008, p21). But in order to make the longer variety - which have a higher energy density, and are less soluble in water so easier to isolate - the team had to engineer in non-natural proteins. When an artificial metabolic pathway was inserted into the bacteria, they successfully produced the long-chain alcohols.

The public’s perception of the risks and benefits of nanotechnology is complex - but can be very positive, a series of reports published in  Nature Nanotechnology  reveal. Public workshops held in the US and the UK showed that science and technology was generally held in high regard, but that the use of nanotechnology for energy applications is viewed far more positively than applications in health (DOI: 10.1038/nnano.2008.362).

A second study questioned previous survey findings that members of the public familiar with technology have a favourable view of it (DOI: 10.1038/nnano.2008.341). The new data revealed that people with pro-commerce values tend to hold a positive view of nanotechnology - the very type of people more likely to have sought information about it - while the anti-commerce tended to focus on the risks.

Exposure to certain chemicals - rather than stress - caused the neurological illness experienced by at least a quarter of veterans of the 1990-1991 Gulf war, a US government committee has concluded. The research advisory committee on gulf war veterans’ illnesses has reported that the anti-nerve agent drug pyridostigmine bromide (PB), plus exposure to a cocktail of pesticides, caused the syndrome - contradicting previous reports that emphasised the impact of battlefield stress.

PB was widely administered, while soldiers report spraying their uniforms daily with pesticides to keep off insects.

Few veterans have recovered from the syndrome, which can cause memory and concentration problems, chronic headaches and widespread pain. No effective treatments have been found - and the report recommends additional funding to research the condition.

Chemicals around the continent are to be decorated with new hazard warning symbols. Europe has adopted the UN’s Globally Harmonized System of Classification and Labelling of Chemicals (GHS). 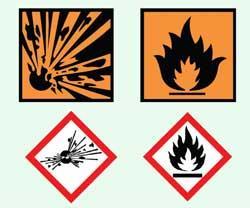 The GHS was formally agreed by the UN in 2003, and the proposal has since trickled through various EU committees and consultations. The heads of the EU’s member states have now agreed to adopt the new legislation on classification, labelling and packaging of substances - the last step before it become EU law.

The deadline for adopting the new system will be 1 December 2010 for substances, and 1 June 2015 for mixtures. The system will be written into the Reach chemicals regulation.

The World Health Organization (WHO) and the US Food and Drug Administration (FDA) have made recommendations as to safe levels of exposure to melamine - the milk contaminant believed to have caused the deaths of six babies in China.

After initially saying it couldn’t establish a safe intake level, the FDA now says that melamine in infant milk powder at levels below 1 part per million is safe. The FDA acted after the compound was found in Nestl?’s US-made baby milk formula at 0.14ppm.

WHO says 0.2mg per kilo of body weight is a tolerable daily intake (TDI) - and that the 1ppm limit is within this level. However, melamine becomes much more toxic in combination with a second contaminant, cyanuric acid - and WHO says the data is insufficient to establish a TDI for co-exposure.

Meanwhile, the Chinese government has announced a four month campaign to crack down on illegal food additives. As many as 294,000 babies in the country suffered health problems due to contaminated infant milk powder.