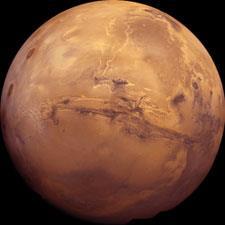 Thorium, silicon and iron concentrations show how Mars has cooled

The chemistry of volcanic rock on Mars offers a picture of the thermal history of the planet, according to scientists in France.

Researchers from the University of Toulouse analysed data from the gamma ray spectrometer (GRS) aboard Nasa’s Mars Odyssey spacecraft. The GRS measures the concentration of rock forming elements on the surface of Mars, and the team concentrated on three elements - thorium, silicon and iron - from volcanic regions of different ages.

Thorium - a naturally radioactive element - is a good measure of how much the interior of the planet has melted, while the concentration of silicon, in the form of silicon dioxide (SiO2), is a good measure of the depth at which melting occurs. The team then used the concentration of iron to validate inferences made from the thorium and silicon data.

The team converted the chemical compositions into temperatures and pressures, which were then converted into just how hot the Martian mantle was, in order to quantify how
much it has cooled over time.

A US Environmental Protection Agency (EPA) draft assessment of the potential health effects associated with formaldehyde exposure needs substantial revision, according to a report from the US National Research Council (NRC).

Formaldehyde is an important industrial chemical used to produce a wide variety of materials. But when it is inhaled, it is metabolised and reacts with cellular components in the body.

A new approach to alkali batteries, in which the cathode is dissolved in water that flows through the system, could be the next generation of battery.

A team at the University of Texas in Austin, US, has placed a solid alkali ion electrolyte between a lithium or sodium anode and an aqueous cathode comprising a metal - in this case iron - in two oxidation states. The cathode solution flows through the system from an attached storage tank.

They used a commercial electrolyte, a solid lithium anode and a water soluble iron cyanide cathode to prove the concept. The battery produced a high potential of 3.4V with lithium meaning it is on par with commercially available lithium-ion alternatives.

An international collaboration of researchers has found a new mineral that they named ’Wassonite’, in a meteorite.

A team led by Nasa scientists found the mineral within the meteorite Yamato 691 enstatite chondrite, one of nine such celestial bodies discovered in Antarctica in 1969. It is thought the meteorite may have originated from an asteroid orbiting between Mars and Jupiter.

Using Nasa’s transmission electron microscope, the team identified the mineral even though it was smaller than one-hundredth of the width of a human hair. Formed of only two elements, sulfur and titanium, Wassonite possesses a unique crystal structure, not previously reported in nature.

The team is continuing to investigate other unknown minerals in Yamato 691 and the nine other meteorites, in order to further understand the formation and history of the solar system.

US researchers have made a step towards understanding why some natural clays have antibacterial properties.

People have used clays throughout history for healing, as they appear to ease swelling, like antibiotics. But no-one knew how until now. Using x-ray spectroscopy and inductively coupled plasma mass spectrometry, researchers at Arizona State University in Tempe, studied clay from an open-pit mine in the Cascade Mountains in Oregon, as well as nearby E. coli  bacteria in water.

The concentration of iron inside the bacteria near to the antibacterial clay was eight times higher than control experiments and they believe that Fe2+ ions overwhelm the bacteria’s outer membranes, oxidising inside the cells to produce lethal hydroxyl (OH) radicals, that kill them.

China, Brazil and India, among others, are set to rival the US, western Europe and Japan as ’scientific superpowers’, according to a report by the Royal Society, the UK’s national academy of science.

The report, Knowledge, networks and nations: global scientific collaboration in the 21st century,  analyses a wide variety of data including trends in the number of scientific publications produced by all countries. China’s share in the total number of articles published is now second only to the US. But the report also highlights a number of rapidly emerging scientific nations including Turkey, Iran and Tunisia. 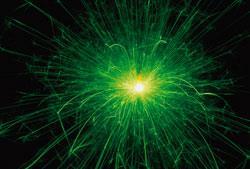 Scientists in the US have developed a cost-effective and environmentally benign green light emitter for use in pyrotechnics.

Barium is traditionally used to produce green light in pyrotechnics, but many barium compounds are hazardous to human health and barium ores can also contain radioactive radium. A possible solution are copper(ii)-based high nitrogen content compounds as they can contribute to green light emission when burned, but they can be temperamental in pyrotechnic formulations, are expensive to make and can be unstable.

Now, a team of researchers from the US army, reporting in Angewandte Chemie International Edition  (DOI: 10.1002/anie.201007827) have developed a barium-free alternative for use in handheld pyrotechnic signals, boron carbide (B4C) - an extremely hard ceramic material used in tank armour, bullet-proof vests and as a high energy solid fuel.

B4C is less reactive than barium containing compounds, but when heated produces BO2 - the source of the green light - for extended periods without a decrease in luminosity. This makes it ideal for longer-burning formulations to be used in signalling, for example as flares, in the military.

The production of cleaner fuels could be a step closer thanks to porous metal-organic frameworks (MOFs).

Sulfur containing compounds such as thiophene are removed from fossil fuels as they produce SOx  exhaust gases. This involves hydro-desulfurisation (HDS) - sulfur compounds are hydrogenated to hydrocarbons and H2S. But aromatic nitrogen compounds such as indoles and carbazoles compete for the active sites on the HDS catalysts, reducing their efficiency.

Now a team of researchers led by Dirk De Vos at the Catholic University of Leuven, in Belgium, have used MOFs containing trimers of metal octahedra with Lewis acid sites, to selectively remove the nitrogen compounds in fuel feeds, leaving the HDS catalysts free to do their job.

Researchers in the US claim to have made a cream to combat nickel allergy. The treatment uses nanoparticles to trap nickel on the skin of mice before it is absorbed into the body.

Nickel sensitivity occurs when the metal accumulates inside the skin and triggers an immune reaction. Unfortunately, there is no cure and although there are creams that relieve the itching or act as a barrier against the metal, few of these are effective.

Now, researchers at the Harvard Medical School in Boston, have added nanoparticles of either calcium carbonate or calcium phosphate to glycerine, which can then be applied to skin. The relatively large nanoparticles - 70nm - stay on top of the skin and capture nickel ions before any irritation occurs.

Data on thorium, silicon and iron gathered by the Mars Odyssey spacecraft has been used to build a thermal history

Nanoparticles trap nickel on skin’s surface before it can irritate