Researchers in the UK have invented a new dye that glows for hundreds of times longer than the conventional probes used to image structures in living cells. 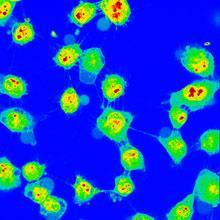 Light-emitting probes that track molecules in living cells typically glow for only a few nanoseconds - once excited by a laser - before their fluorescence is quenched. And other molecules in the cell that also naturally fluoresce when energised create unwanted background noise.

The new non-toxic dye, created by scientists from the Universities of Sheffield and Durham, with colleagues from the Rutherford Appleton Laboratory in Oxfordshire, glows for several microseconds once excited in living cells, long after any interfering fluorescence has fizzled out.

It is a rigid terdentate molecule consisting of central platinum flanked by two pyridine rings and topped by a phenyl group. Though the longer-lived probe has encouraging properties, it hasn’t yet been coupled to biological molecules.

Research teams increasingly involve scientists from different universities, according to a study of more than 4.2 million research papers over three decades. In the 1970s, say Brian Uzzi and colleagues at Northwestern University, Illinois, cross-university research was rare; but by 2005, it accounted for one-third of papers published in science and engineering. What’s more, such multi-university papers were more highly cited than isolated efforts - though only if they included authors from the highest-regarded institutions.

The smooth growth in collaboration appears to pre-date the internet, the study’s authors note, publishing in Science  (DOI: 10.1126/science.1158357). But top tier universities are increasingly collaborating only with each other. The authors suggest this ’social stratification’ may lead to ’outstanding scientific knowledge concentrated in fewer, not more, centres of high impact science’.

Global regulations are failing to protect human health and the environment from rising levels of ground-level ozone, according to a report from the UK’s Royal Society.

Ozone (O3) in the upper atmosphere shields the Earth from harmful ultraviolet rays, but close to the ground it can interfere with photosynthesis - stunting crop growth - and contributes to smog, worsening conditions like asthma.

Ground-level ozone is created when sunlight drives photochemical reactions between volatile organic compounds and nitrogen oxides from fossil fuel burning (mainly from car exhaust fumes). As polluted air produced in one country can easily travel to others, the Royal Society report says a truly global strategy is
needed to combat increasing ground-level ozone.

The growth in R&D spending by major EU-based companies (up 8.8 per cent) outpaced their US counterparts (an 8.6 per cent increase) for the first time in five years, according to the European Commission’s annual scoreboard of industrial R&D investment.

The US still leads R&D investment overall, but its growth rate dropped sharply from last year’s 13.3 per cent, perhaps reflecting the financial crisis. Much of the EU’s acceleration came from investments abroad, especially in China. Pharmaceutical and biotechnology companies remain the largest R&D spending sectors, but investment in alternative energies, such as solar power, is rapidly increasing.

Japanese scientists have made biofuel cells that produce enough power to run an mp3 player with speakers, or a remote controlled car. Until now, the energy output from such cells - which use microbes to digest fuel - has been too low for practical applications.

Tsuyonobu Hatazawa, from the Sony Corporation, Kanagawa, and colleagues developed a bio-battery that uses enzymes as catalysts to oxidise glucose, generating an electric current. Electron transfer in a biofuel cell can be slow so Hatazawa used a naphthoquinone derivative - known as an electron transfer mediator - to shuttle electrons between the enzymes and the carbon-fibre electrodes in the fuel cell. When the researchers stacked four of their cells together, they achieved a power output of 100 milliwatts, and used it to operate a radio-controlled toy car. The work is published in Energy and Environmental Science  (DOI: 10.1039/b809841g).

Three European researchers who pioneered work on human viruses that cause severe disease were awarded the 2008 Nobel prize for physiology or medicine. Harald zur Hausen, of the German Cancer Research Centre, Heidelberg, took half the prize for his discovery that human papilloma virus (HPV) causes cervical cancer, a disease that affects around 500 000 women each year. The work led to the development of protective vaccines against two HPV strains.

French researchers Fran?oise Barr?-Sinoussi from the Pasteur Institute, Paris, and colleague Luc Montagnier, now at Paris’ World Foundation for AIDS Research, shared the rest of the prize for their discovery that the Human Immunodeficiency Virus (HIV) causes AIDS.

The physics Nobel recognised work on the phenomenon of spontaneous broken symmetry in subatomic particles. Half of the award went to Yoichiro Nambu from the University of Chicago, US. The other half was shared between Makoto Kobayashi from the High Energy Accelerator Research Organization in Tsukuba, Japan and Toshihide Maskawa from Kyoto University.

Ernest Eliel, a renowned stereochemist who wrote the classic textbook Stereochemistry of carbon compounds,  died on 18 September at the age of 86. 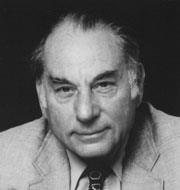 Born in Cologne, Germany, Eliel emigrated to Scotland in 1938, fleeing the Nazis. He was sent to an internment camp in Canada two years later as an ’enemy alien’. After studying in Cuba and the US, in 1948 Eliel joined the University of Notre Dame, where he authored the textbook that has sold over 40,000 copies. In 1972, he joined the University of North Carolina, Chapel Hill, where he spent the rest of his career.

Eliel was a former president of the American Chemical Society, and the 1996 Priestley medallist. A biography by chemical historian Jeffrey Seeman can be found the website.

US scientists have assembled ribonucleic acids (RNA) into an adaptable logic system that can be programmed to sense and respond to molecules inside living yeast cells. Publishing in Science  (DOI: 10.1126/science.1160311), Christina Smolke, of the California Institute of Technology, says the work paves the way towards the dream of artificial computing devices that could monitor cell conditions and take appropriate action - such as sending out drugs to treat a diseased cell.

The US Environmental Protection Agency (EPA) has controversially decided not to set safety standards for perchlorate in public drinking water - an emotive issue in the US.

Perchlorate, a propellant used in rocket fuel and fireworks, interferes with the thyroid gland and can affect brain development and growth, especially in foetuses and babies. The EPA says a national water regulation gives no ’meaningful opportunity for health risk reduction’ since nearly all public drinking water systems don’t contain dangerous levels of perchlorate.

Some senior US toxicologists are concerned that the decision allows water companies to forgo all perchlorate testing - and claim the EPA ignored some important studies, and hasn’t recognised the potential exposure of vulnerable newborns to perchlorate through contaminated breast milk and formula. Others say the chemical has been targeted unfairly.

The announcement was made on 3 October but will not be finalised until November, allowing a month for public comment.