Israeli researchers have demonstrated for the first time that an electrochemical cell can be made using the same metal for both electrodes.

In Chemistry of Materials  (DOI: 10.1021/em2000655) David Avnir and Ofer Sinai of Hebrew University demonstrate the principle by inserting the electrodes into a lemon just as generations of school children have done before. 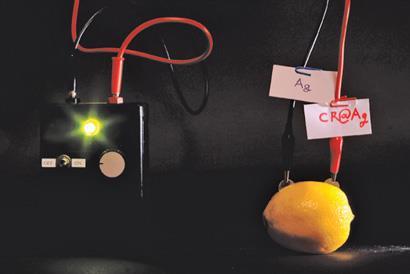 The lemon battery in action

The difference between the two silver electrodes is that one of them is doped with the diazo compound Congo red. This changes the electrode potential of the electrode enough that, when connected up in a circuit, the silver-lemon battery powered a light emitting diode (LED).

US researchers have made nanowires that propel through liquids, driven by an external magnetic field. The wires could be used to deliver drugs in the human body because no chemicals or fuel sources are required.

In Soft Matter  (DOi: 10.1039/c1sm05503h) Eric Lauga and Joseph Wang from the University of California San Diego describe their nanoswimmers, which they made by attaching nickel heads to silver tails. They also showed how a magnetic field propels the wires through human serum, demonstrating that they have potential for biomedical applications such as targeted drug delivery.

The team found that the wires move with a speed approaching that of natural microscopic swimmers like bacteria and are faster than other externally-powered nanomotors. The next problem to address how the wires behave in flowing liquids.

India is to set up a new environmental regulator to enforce new green standards among businesses. The National Environment Appraisal and Monitoring Authority (NEAMA) will reform planning legislation and will also work towards enhancing environmental governance across the country, according to the Indian Prime Minister.

The move comes after several controversies involving the Environment Ministry blocking some projects while waving others, such as the new Mumbai Airport, through. The government is currently inviting feedback on the proposals.

Removing a molecular switch from blue-green algae (cyanobacteria) could lead to a new source of green hydrogen.

In good times, cyanobacteria build up stores of adenosine triphosphate (ATP) in preparation for the bad (dark) times.Allowing the organism to survive long periods of dark.

Japanese and German researchers removed the switch that leads to the hoarding and found that even without this failsafe, the bacteria didn’t suffer. Instead, under light, the algae grew just as usual but without creating such large ATP reserves.

This could lead to the energy instead being captured as hydrogen using algal bioreactors say the researchers. The research is published in Journal of Biological Chemistry  (DOI: 10.1074/jbc.M111.234138).

The US Environmental Protection Agency (EPA) has not taken adequate steps to assure the safety of public drinking water because of ’systemic limitations’ and politicisation. These are the conclusions of a report from the Government Accountability Office (GAO), Congress’ investigative arm.

The EPA hasn’t recommended any new contaminants for regulation since gaining this responsibility in 1996. The GAO concluded that the EPA doesn’t have suitable criteria and its testing programme for unregulated contaminants has ’fallen short’.

The GAO recommends that the EPA develop criteria to identify water contaminants that pose the greatest health risk, use appropriately sensitive analyses and develop a process to evaluate the health effects of such contaminants on sensitive subpopulations.

Richard Pike, former chief executive of the RSC, has died at the age of 61. Pike stood down from his position in February this year after five years at the helm of the society.

Born on 2 April, 1950, he attended Gosport County Grammar School before studying at the University of Cambridge, where he gained his BA and PhD. His research investigated experimental and theoretical aspects of vapour bubble dynamics in boiling liquids, focusing on the thermal and fluid characteristics of water and organic liquids in various gravitational fields, including Earth and zero gravity.

Pike was sponsored by British Petroleum (BP) as an undergraduate and went about studying Japanese during his time at college. This led to a 25-year career in BP, where he held a number of technical and commercial positions in the UK and abroad.

Pike joined the RSC in February 2006 and it was a position he relished. He quickly became a leading advocate of the chemical sciences, allowing the RSC, combined with its parliamentary activities, to become a significant voice in science and education. One of his best known initiatives was the ’Five-decade challenge’, an exam for the brightest 16-year-old chemistry students taking in exam questions from the 1960s through to the 2000s.

Pike is survived by his wife Fiona and three children.

A new device uses surface tension to distinguish liquids or reveal hidden messages, report US chemists in the Journal of the American Chemical Society (DOI: 10.1021/ja2053013). 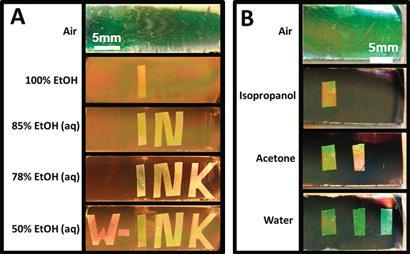 The team from Harvard University functionalise the surface of photonic crystals so that they have a specific pattern of surface chemistry. This means that only liquids with particular surface tensions can wet certain areas of the crystal. Any of the pattern that remains dry becomes visible.

The team has used the device to distinguish between different concentrations of the same liquid as well as distinguishing between common lab solvents. As well as using the photonic sensor to identify unlabelled beakers of liquid, the new devices could have potential for authentication and anti-counterfeiting applications.

US scientists can now control the reactions occurring inside cells. The technology could lead to the manipulation of cell functions in the future, they say.

The researchers created cell-surface protein receptors and threaded them through a cell membrane so that the receptor was outside the cell and the protein within the cell. The team also designed ligands to initiate and control phosphorylation reactions in the cell and attached these to a bead. As the ligands bound to the receptors, many receptors were brought closer together, increasing the phosphorylation rate.

Korean scientists have used graphene sheets to make a transparent and lightweight loudspeaker which, they say, can be attached to windows and computer screens.

One of the big challenges in graphene research is to fabricate large area films of graphene. In Chemical Commununications  (2011, 47, 8527) the scientists demonstrate not only a new method, using inkjet printing and vapour deposition onto poly(vinylidene fluoride) (PVDF), but also a new use for the material: a loudspeaker.

The speaker system consists of a PVDF thin film sandwiched between two graphene electrodes. Using an electrical current from the sound source, the converse piezoelectric effect causes the PDVF film to distort, creating sound waves. Such a system would be easy to install and usable anywhere where sound is needed, or even as noise cancelling devices.

EPA in political tug of war over environment

Richard Pike, who led the RSC for five years and saw membership rise to record levels, has died at the age of 61

Graphene sheets could be used to make speakers for sound systems