Next Mars rover will make oxygen from CO2

Nasa’s Mars 2020 rover will take a small step towards helping us directly explore the red planet, by studying how to convert its carbon dioxide atmosphere to oxygen. Jack Mustard from Brown University in the US suggests the Mars Oxygen In-situ resource utilization Experiment (MOXIE) technology could in future help refuel vehicles returning to Earth. ‘It represents an opportunity to sever the tether between Earth and exploration,’ says Mustard, who chaired the Mars 2020 science definition team.

Based on the current Curiosity rover’s design, Mars 2020 will carry seven instruments, including MOXIE, together costing approximately $130 million (£77 million). MOXIE itself will be a reverse fuel cell, developed at the Massachusetts Institute of Technology, converting CO2 into oxygen and carbon monoxide via solid oxide electrolysis. The oxygen can then either be breathed by people, or burned as fuel. 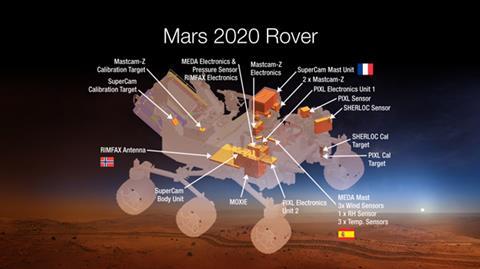 The design of Mars 2020 is based on the Curiosity rover, but it will carry more sensitive instruments

The Mars 2020 mission’s other themes include assessing its landing site’s geology, and searching for signs of ancient Martian life. To achieve that it will carry an analytical arsenal for studying both mineral and organic – and therefore potentially once living – matter.

Los Alamos National Laboratory, in New Mexico, will lead development on SuperCam, the successor to Curiosity’s ChemCam imaging and chemical analysis tool. Like ChemCam, SuperCam will use Laser-Induced Breakdown Spectroscopy (LIBS), which can determine a target’s elemental composition from over six metres away. As well as visible and infrared spectroscopy analysis of reflected light, it will add Raman and time-resolved fluorescence spectroscopy.

The Planetary Instrument for X-Ray Lithochemistry, PIXL, will be an x-ray fluorescence spectrometer mounted on a robotic arm so it can be placed next to targets. It displaces a-particle x-ray spectrometers (APXS) used by Curiosity and previous missions, Nasa’s Mitch Schulte tells Chemistry World. PIXL offers ‘two orders of magnitude better spatial resolution, higher sensitivity and accuracy, and the capability to detect and quantify 10 additional elements,’ he explains.

NASA will also develop the Scanning Habitable Environments with Raman & Luminescence for Organics and Chemicals (SHERLOC) ultraviolet (UV) laser spectrometer. It will be the first UV Raman spectrometer on Mars’ surface, and its ability to detect organic ring structures will be important in hunting for life.

However, Mustard – who helped set Mars 2020’s science goals but didn’t select its payload – is troubled by the use of Raman spectroscopy. ‘I’m speaking from limited knowledge of these instruments, but I’m concerned that relying on unproven technologies will mean it takes a lot of time to accomplish the goals. We recommended that there be an ability to measure the mineralogy of the site efficiently. Curiosity is painfully slow in being able to get at the hard-core science measurements.’ Schulte sought to defuse this concern. ‘Development of Raman instruments for flight has been ongoing for a number of years and has become sufficiently mature,’ he says.

Mars 2020 takes its place in a procession of probes headed for our neighbour planet. After its 2016 launch Nasa’s next mission, InSight, is set to study the planet’s deep interior for the first time.