Researchers in the US have shown that a membrane embedded with carbon nanotubes can deliver a pulse of nicotine at the flick of a switch - rather than the continuous diffusion of the drug through current skin patches designed to help people quit smoking. The idea, according the patch’s inventors, is that nicotine could be delivered to the body when it is most required, to fit in with the wearer’s individual pattern of behaviour.

Bruce Hinds and his team at the University of Kentucky in Lexington embedded multiwalled carbon nanotubes in a composite and used a microtome to generate a thin membrane. They then electrochemically grafted diazonium molecules onto the ends of the nanotubes, which decompose to form a uniform layer of polybenzoic acid. This layer was in turn reacted with a dye molecule containing a high density of negatively charged sulfonate groups. In this functionalised form the membrane can be made to behave as an electrode.

The team then placed a reservoir of nicotine above the membrane, which contained a second electrode. ’When we apply a negative voltage at the bottom of the membrane and a positive voltage at the solution we get pumping of positive ions from the reservoir through the nanotubes,’ says Hinds. This migration of ions pulls through neutral molecules - a process termed electroosmosis. At a pH of 8, nicotine is 50 per cent cationic, so half the nicotine molecules are positively charged and half are neutral - further improving the flow of the drug through the membrane. 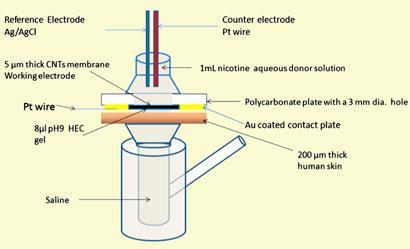 ’We get very efficient pumping with only a small power source needed - something like a watch battery,’ says Hinds. Among the many intriguing properties of carbon nanotubes is the extreme ’atomic smoothness’ of their inner walls: they offer little resistance to movement of molecules. This could be one reason for the high efficiency of the system.

Hinds says that in a laboratory test, the system can deliver a dose of nicotine efficiently at the flick of a switch. ’There are other pumping systems on the market, but they are bulky,’ says Hinds. The system could also be used for people trying to withdraw from drugs other than nicotine, suggests Hinds. The patch remains experimental at this stage with no immediate plans for commercial development.

Olgica Bakajin, chief technology officer of Porifera Inc., a California-based company specialising in the commercialisation of carbon nanotube membranes, says, ’This is a very exciting paper that for the first time demonstrates feasibility of use of carbon nanotube membranes as a highly efficient battery-operated programmable nicotine patch. This is a great example of a technology where nano-scale phenomena makes it work.’