NMR: Nobel work if you can get it

Richard Ernst won the Nobel Prize for his work on NMR spectroscopy, but has seldom used the technique experimentally. He talks to Chemistry World

Richard Ernst won the Nobel Prize in Chemistry in 1991 for his contributions to the development of high resolution nuclear magnetic resonance (NMR) spectroscopy, but to this day has hardly ever run a ’useful’ NMR experiment himself. He is a self-professed ’tool maker’ having built instruments, and describes himself as ’an engineer, rather than a scientist’.

At the recent meeting of Nobel laureates in Lindau, Germany, Ernst spoke to Chemistry World about his career, the future of NMR spectroscopy, research funding and his love of Tibetan art.

There were early signs that Ernst was destined to become a chemist - when he was 12 years old, he was exploring the family house and came across a box of chemicals that belonged to a late uncle. ’I took the chemicals down into the basement and started to play with them making experiments. I survived and our house survived, so I became a chemist,’ he says.

When asked what triggered his interest in NMR spectroscopy, Ernst makes no secret of the fact that it happened by chance. He knew he wanted to study physical chemistry - he hoped it could help explain some of chemistry’s mysteries - but he was unsure where to focus. ’I went and asked the professor of physical chemistry what I should do my PhD thesis on and he said "NMR". I had never heard of it and I asked him to explain it to me and I found it interesting,’ recalls Ernst.

With every PhD though there are always set-backs and Ernst’s was no exception. The first NMR instrument Ernst built with his supervisor, Hans Primas, didn’t work too well, and the Swiss company that copied the instrument went out of business. ’Evidently, it was a failure,’ says Ernst. But eventually, the successor company managed to develop a working instrument and from the ashes of the original project was born instrument manufacturer Bruker-Spectrospin, today known as Bruker Biospin.

Ernst explains that a major challenge today for expanding NMR spectroscopy and magnetic resonance imaging (MRI), a form of NMR used in medical imaging, is adequately training people to ’take full advantage of all the information produced from the powerful method’. This is very important, he insists. ’You should improve the understanding of the users and that’s where the bottleneck is at the moment - among medical doctors in particular,’ he says. There is no point building bigger and better instruments if users can’t apply them properly.

Ernst’s views on scientific research are based on his conviction that active responsibility brings freedom. He believes today we are exploiting our resources irresponsibly and not thinking about the needs of future generations. ’We act as plain egoists and self-interest is our driving force - using up all the crude oil for example. We should reduce our consumption quite drastically and develop an economic system based on altruism and foresight,’ he explains. ’Only those who behave responsibly deserve freedom. Freedom means having a good night’s sleep after a day of responsible action.’

At a time when reducing spending is on everyone’s minds and science budgets are under threat, Switzerland seems to be doing quite well and hasn’t cut research grants excessively. Ernst explains that the country’s position seems to be healthy. ’The Swiss Franc is much too strong and still going up in value,’ he comments. He believes cutting research funding is a very bad idea, as this will in turn affect technological advance and ultimately our well-being. 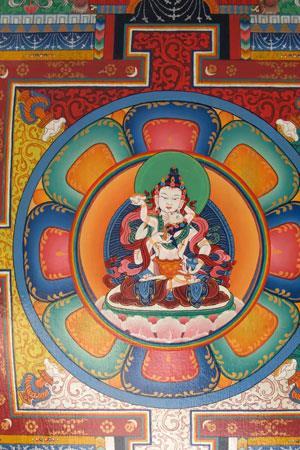 One of Ernst"s passions is Tibetan art

What is life like as a Nobel Prize winner? One thing that Ernst has noticed is the increase in invitations to conferences from many disciplines, not just the field that he is respected for. He speculates that if he hadn’t won the prize he would have probably gone to no more than two NMR conferences a year. ’Now, I try not to go to NMR conferences at all. I like to broaden my scope and prefer to go to conferences where I don’t know anything and where people don’t know me yet,’ he says.

Ernst describes his life like a tripod. One of the legs is his career in NMR, while the other two, perhaps surprisingly, are music and Tibetan art. ’People should develop interests outside of their professional field and have passions that give them stability,’ he explains.

Ernst says he has been fortunate to link two of the legs of the tripod together and has developed an interest in Raman analysis of the pigments in his Tibetan paintings using a Raman microscope he keeps near his bedroom. ’Music is still very important, but Raman and Tibetan art became my real friends,’ he adds.

There are hand-held NMR instruments available to analyse objects like paintings, but Ernst prefers to stick to Raman. The strength and resolution of the magnets in the hand-held instruments are poor at the moment, as is the sensitivity and spectral resolution. ’Usually, these devices analyse proton resonance and you can look at the water content in, for example, murals on walls to see whether there is humidity, making it unstable,’ he comments. Even though there have been advances in hand-held NMR instruments, ’Raman is better for pigment analysis,’ says Ernst.

Ernst spoke of the scientific areas that he thinks could win the Nobel prize in the future. He described functional MRI as an exciting field. ’You can learn so much about brain function from magnetic resonance,’ he enthuses. He believes that the chemistry of biological processes is a hot area to look out for, but also thinks ’there could be more prizes for nano-devices with chemical functions’ in the future as well.

Beyond the prizes and the accolades, it seems that deep down this Nobel laureate, a celebrity of the scientific community, is just as interested in the fundamental science, just as worried about the big global issues, and just as keen on a fulfilling home life as anyone else. And even if he’s never run a useful NMR experiment himself, there are plenty of practising chemists who are grateful for Ernst’s work to develop what the Nobel committee described as ’perhaps the most important instrumental measuring technique within chemistry.’