No more oxygen for artificial lung

New lung device uses air instead of oxygen, enabling the device to be portable

US scientists have mimicked the structure of a lung to make a device that can use air as a ventilating gas instead of pure oxygen. The invention could mean that oxygen cylinders to accompany artificial lung devices for lung disease patients are a thing of the past and implantable devices could be a step closer.

Joseph Potkay from Louis Stokes Cleveland VA Medical Centre and co-workers fashioned microfluidic channels from the polymer polydimethylsiloxane and made them branch into smaller channels and then into artificial capillaries, similar to the arteries and capillaries in a real lung. They added blood and air flow outlets and inlets and coated all the channels in a polydimethylsiloxane gas exchange membrane.

The team tested the device with pig blood. As the blood flowed through the device from the blood inlet, they fed air into the air inlet and as it travelled along the channels, oxygen molecules diffused across the gas exchange membrane into the blood on the way to the blood outlet. Meanwhile, blood coming from the inlet would be rich in carbon dioxide, which would diffuse across the membrane and travel to the air outlet.

They found that the device ’exhibited larger oxygen exchange efficiencies than current devices in which pure oxygen is needed, enabling air to be used as the ventilating gas,’ says Potkay. The oxygen exchange efficiency is three to five times better than current artificial lung devices owing to the small, micron-scale, blood and air channels. This is the first demonstration that features as small as those found in the lungs are effective. 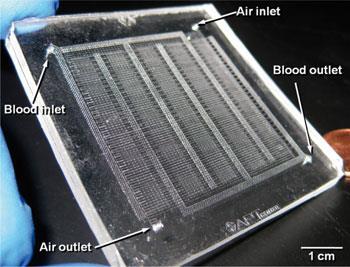 The artificial lung device consists of small microfluidic channels, similar in size to blood vessels in real lungs, with a membrane for oxygen and carbon dioxide exchange

At the moment, lung disease patients in need of respiratory support rely on mechanical ventilators in which blood from the patient is circulated through a machine to oxygenate it. As  Jeffrey Borenstein, an expert in microsystems technology and biomedical devices at the Charles Stark Draper Laboratory, US, points out: ’Current technology involves complex systems that are limited to intensive care units, so Potkay’s device has the potential to provide clinically relevant oxygenation levels using ambient air, opening the door to portable systems.’

The team aims to improve their device’s blood compatibility and scale it up so it can deliver enough oxygen to be suitable for humans.