With estimates that only ~60% of oil has been recovered from established oil fields, it seems that there’s an untapped source waiting to be discovered. With this in mind, James Tour and his colleagues from Rice University, Texas, and Nankai University, China, have designed nanoparticles to detect crude oil hydrocarbons in rocks in the fields.

The nanoparticles consist of oxidised carbon cores surrounded by polyvinyl alcohol shells that can transport hydrophobic, or water repellent, compounds called nanoreporters through the rocks. ’It was truly exciting to see that we could build nanoreporters that will migrate through oil-field stone,’ says Tour. The nanoparticles release their cargo when they come into contact with rocks containing oil, which can be seen when they are recovered. 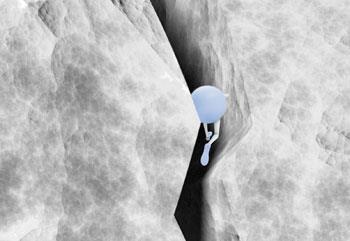 ’We know that there’s a large volume of residual oil down there, but we don’t know exactly where it is,’ says Bob McNeil, fossil fuels specialist from the oil operator sector. ’If we had that information, we could start to design smart enhanced oil recovery procedures targeting that oil.’

McNeil suggests that the cargo could be loaded with a material that can be imaged by a tool placed in the well bore or on the surface. ’This would allow the depths of the zones with the highest residual oil content and the locations of oil accumulations within those depth ranges to be established,’ he adds.

Tour says that he is confident that his laboratory method can be adapted to test rock samples on site. It is still unknown what environmental effect these nanoreporters may have but concerns will hopefully be quashed by the biodegradable polymer and naturally abundant carbon black used to make them, he adds.