Novel mass sensor is off the scale

The world's most sensitive balance has been created, capable of measuring the weight of a single proton

Spanish scientists have produced the world’s most sensitive set of scales that should be capable of weighing a single proton. These scales could be used to detect and identify single molecules and atoms, or study in unprecedented detail the binding of atoms to surfaces. 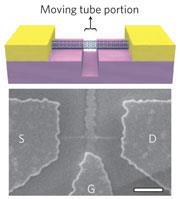 The yoctogram sensor should be capable of detecting a single proton

Several research groups have developed nanomechanical sensors based on this mechanism, using either carbon nanotubes or nanoscale strips of materials such as silicon carbide. But these sensors have generally not been sensitive enough to detect individual molecules and atoms.

To enhance the sensitivity, the group, led by Adrian Bachtold at the Catalan Institute of Nanotechnology in Barcelona, suspended their carbon nanotube over a very narrow trench, just 150nm wide, because short suspended nanotubes produce greater changes in resonant frequency than long ones. They also conducted the measurements in an ultra-high vacuum and at just 4K, reducing any interference from unwanted molecules and electrical noise. But this still wasn’t enough.

The problem now was that the resonance frequency of the nanotube began to fluctuate between different levels. These fluctuations were very small, which explains why they hadn’t been noticed before.

After controlled heating with an electrical current, Bachtold and his team found that their sensor could detect single naphthalene molecules (C10H8) and small numbers of xenon atoms, neither of which had been achieved before. Based on these results, Bachtold calculated that the sensor has a resolution of 1.7 yoctograms (1.7 x 10-24g), around the mass of a single proton.

Still, the sensor can’t yet accurately measure the masses of individual atoms and molecules. This is because the reduction in resonant frequency is also influenced by exactly where the particles land on the nanotube and that can’t be controlled at the moment, although Bachtold is working on this.

’The paper is very nice and shows that an exceedingly simple mechanical system can be pushed into the hydrogen atom mass limits,’ says Alex Zettl at the University of California, Berkeley, who has developed similar carbon nanotube-based mass sensors.