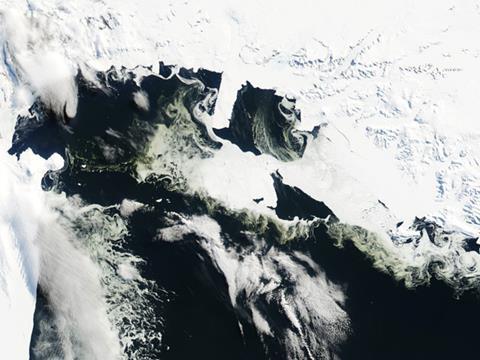 New data from iron fertilisation experiments in the Southern Ocean support the idea that artificially created algal blooms can draw carbon to the bottom of the ocean, where it may be stored for centuries. By seeding surface waters with iron, an international team of 30 scientists produced the largest bloom ever observed in a fertilisation experiment.

Ocean iron fertilisation involves dusting the sea with iron in areas where the nutrient is limited, in order to fuel the growth of algae and their uptake of carbon for photosynthesis. Due partly to unknown consequences for marine life, experiments are tightlycontrolled. However, proponents of iron fertilisation believe it could be one of the more promising geoengineering approaches to combatting climate change.

The new study reports the results of an experiment carried out in 2004. Victor Smetacek, now retired but formerly of the Alfred Wegener Institute in Bremerhaven, Germany, led the team. ‘This experiment was done in a region of the Southern Ocean that is rich in silicate, so we got a big bloom of diatoms that need silicon to make their shells,’ explains Smetacek. ‘Because they are protected by these shells, they are hardly grazed and sink out.’ By contrast, studies in areas where silicon is scarce have produced blooms in other types of plankton that are heavily grazed. 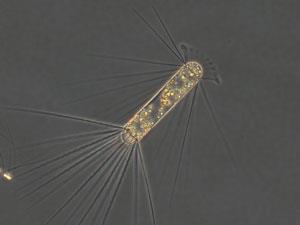 The team fertilised a 60km wide eddy – essentially a closed system or giant test tube in the sea – with iron(II) sulfate and tracked sinking particles as they descended the rotating column of water. For three weeks following fertilisation, carbon stocks in the fertilised patch increased. Then, in the fourth week, as the algae died and began to sink rapidly, the researchers noticed a steep increase in the amount of carbon below 200m. They estimated that at least half of the bloom sunk further than 1km, with a ‘substantial portion’ eventually making its way to the sea floor.

‘One of the key questions has been how much of the carbon that is taken up into the ocean goes right back into the atmosphere and how much sinks deeper and they were able to stay long enough and look deep enough to actually see that happening,’ says Ken Buesseler, a marine chemist at Woods Hole Oceanographic Institute in Massachusetts, US, and leader of an international consortium on in situ iron studies (ISIS). He describes the team’s staying power as ‘heroic’ – few have remained at sea to be able to observe the fate of carbon beyond a couple of weeks.

Larger scale experiments should be the next logical step, according to Smetacek, who regards his own study as ‘miniscule’. However, he says current regulations will make any such experiments difficult.