Ocean hydrocarbons made from rocks

Inorganic chemistry discovered on the sea-floor

Researchers investigating 60-metre high carbonate chimneys in the Atlantic Ocean - the so-called ’Lost City’ deep ocean vent field - have discovered that hydrocarbons seeping out from the vents don’t come from a biological source such as bacteria, plants or animal matter.

Instead, say Giora Proskurowski from the University of Washington, US, and colleagues, inorganic carbon leaching from surrounding sea-floor rock (which has risen from the Earth’s mantle) combines with hydrogen, heat and water to make the hydrocarbons. These Fischer-Tropsch style reactions have been shown to be plausible in the laboratory, but the team’s observations were the first consistent evidence measured in situ on the ocean floor, co-author Gretchen Fr?h-Green, of the Swiss Federal Institute for Technology, told Chemistry World. 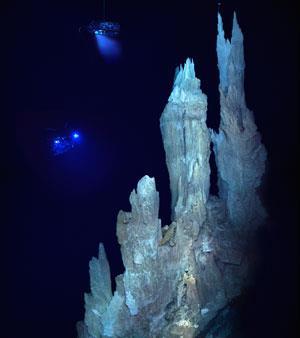 The mantle-derived rocks in the Lost City field have been active for over 30,000 years, and the researchers think many other similar formations could exist, undiscovered, in the deep Atlantic Ocean. ’Hydrocarbon production by Fischer-Tropsch type chemistry could be a common means for producing precursors of life-essential building blocks in ocean-floor environments,’ they conclude.

There’s not enough evidence, though, to substantially rewrite the familiar story that fossil fuels are formed from the carbon in compressed plant and animal matter, said Fr?h-Green. ’We haven’t done the calculations to suggest whether hydrocarbons originate more from mantle-derived rocks than from a biological source like organic-rich sediments or methane hydrates. It will be hard to honestly quantify,’ she said.