An efficient way to make small molecules by repeatedly using just one coupling reaction to clip together pre-prepared chemical fragments is going commercial.

Martin Burke and colleagues from the University of Illinois, US, have demonstrated that by exclusively using Suzuki-Miyaura coupling (a popular reaction for making carbon-carbon bonds) they can make complex natural products from customised building blocks, such as double bonds and aromatic rings[1].

A range of suitable building blocks will be commercially available worldwide within eight months, ready to be bought off-the-shelf, Burke says, thanks to an agreement with a large chemical company. And the technique is already being used in the pharmaceutical industry to quickly make new collections of small molecules for drug screening.

’The impact of this, not the least of which will be making the power of small molecule synthesis available to the non-expert, could be extraordinary,’ Burke told Chemistry World. ’Ultimately, we envision a collection of about 100 building blocks, and the chemistry is so simple that we feel very optimistic about automating the process.’

Burke’s technique has parallels with the way small proteins are made, where amino acid building blocks are slotted together by repeated, and automated, use of peptide coupling. Just about any scientist can make or order a peptide today, but organic synthesis - even of small molecules - remains accessible only to highly-trained chemists.

Burke hopes to change that with a series of haloboronic acid building blocks, of which he has published 9 prototypes so far. These reagents can be linked together repeatedly with Suzuki coupling because both the necessary coupling partners are contained in one bifunctional molecule - a halide at one end, a building block in the middle, and a boronic acid at the other end.

But such a reaction would quickly run out of control, with building blocks linking together haphazardly in any order, were it not for a key protecting group which shuts off the reactivity of the boron end, and, crucially, can also be removed without harsh reaction conditions that would affect the growing molecule. Earlier this year, Burke’s team showed that the cheap and non-toxic MIDA (N-methyliminodiacetic acid) ligand masked boron’s reactivity and was stable to anhydrous bases, yet could be removed at room temperature by any weak aqueous base - including sodium bicarbonate - when required [2].

This makes it possible to couple a protected fragment at its halide end only, then remove the MIDA ligand and expose the boronic acid, ready to link to another fragment and repeat. 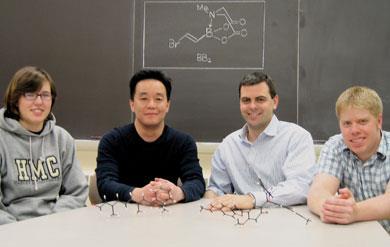 Source: © University of Illinois, US

The protected building blocks, although they hide a reactive boronic acid core, are extremely stable and easy to purify, Burke says; he has stored them in air for over a year and a half without any decomposition. ’Certainly not all, but many complex molecules will be easily accessible via iterative cross coupling of these reagents,’ he said. He has already published building blocks containing aromatic rings and double bonds, and others to come include propionate and terpene units - which nature uses in the biosynthesis of small molecules.

Scientists working in the pharmaceutical industry are enthusiastic about Burke’s vision. ’The broad scope and selectivity achieved, the technical simplicity of the boronic acid protection and deprotection, as well as the practicality of use of these shelf-stable solids make this an ideal fit for library synthesis and medicinal chemistry exploration in the pharmaceutical industry,’ commented Lawrence Hamann, director of discovery chemistry at Bristol Myers-Squibb. He added that his group had already begun using the methodology.

Kanth Josyula, a principal scientist in R&D at Aldrich Chemicals, pointed out that the synthesis route can give boronic acid derivatives which would usually be too reactive to isolate. ’More importantly, mimicking the peptide coupling in boronic acid coupling should make the synthesis of compound libraries very quick and easy,’ he added.

There are plenty of barriers to overcome, Burke said - not least with the goal of automation, where the team will have to work out how to separate products from unreacted materials, probably with some solid-state chemistry similar to peptide coupling. ’All the building blocks will be commercially available worldwide from a major chemical company, which shares our vision for the broad future development of this chemistry,’ he said.