Scientists in Canada have developed a new microfluidic model carved from rock, which can replicate the conditions found in underground oil reservoirs in a laboratory with more accuracy than ever before. Using it to study the processes that occur in these reservoirs could lead to greater oil yields.

The microfluidic model is etched into a calcite crystal

Around 60% of the world’s oil reserves are found in carbonate rocks, such as limestone and dolostone. However, these rocks vary considerably in texture, porosity and permeability from one area to another, making a consistent flow of oil through their pores difficult to achieve. Because of this, only 20% of the oil they contain can be extracted.

David Sinton’s group, at the University of Toronto, hope that the model they’ve developed will allow them to properly study the rock structure, and see how it’s affected by oil extraction techniques. The techniques could then be optimised to make them much more efficient.

Microfluidic models, which can show how fluids move through the pores of the rock, are normally made from glass or silicon. Carbonate rock, though, is a much more reactive material, and using it to construct the microfluidic model means that the chemical reactions that take place between the fluid and the rock can also be taken into account.

The reactive nature of the rock made the standard methods for making micromodels impossible to use, so the group designed a new fabrication process. A protective wax coating was applied to a wafer-thin slice of calcite, and was then removed in places with a laser to form a pattern. Dipping the wafer in concentrated hydrochloric acid dissolved the uncoated parts of the rock, forming microchannels on its surface.

So far, the group have used the model to study the flow of acidic fluids through carbonate rock, as acid is commonly injected into carbonate reservoirs to widen the pores and make oil flow easier. However, it could be used to study a host of other factors and effects, such as temperature, pressure and the fluid used. Other reactive rocks could also be studied. 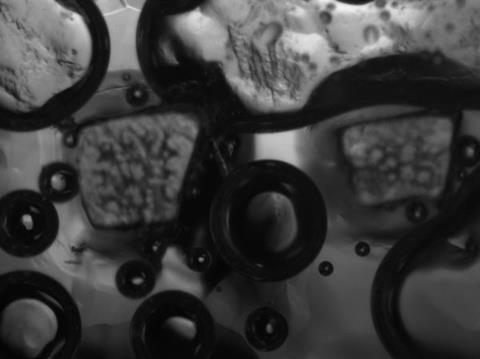 The potential of the new fabrication method is clear to Nam-Trung Nguyen, director of the Queensland Micro- and Nanotechnology Centre, Australia, who describes it as a ‘low-cost and unique idea’ that could be applied to many types of natural materials, and other industrial applications such as coal mining.

Sinton says this research area has a great future: ‘There is tremendous potential for impact and so many exciting directions – we’re going as fast as we can.’