Older women should not use HRT

A long-term clinical trial into hormone replacement therapy (HRT) has confirmed that HRT should not be prescribed to older women many years past menopause. The researchers conclude that HRT is useful to treat acute symptoms of early menopause in younger women.

The women’s international study of long duration oestrogen after menopause (Wisdom) trial involved 5692 women aged between 50 and 69, divided into two groups. One group was given a daily dose of combined hormone therapy (oestrogen and progesterone) and the other given a placebo pill. The trial was stopped early after a Women’s Health Institute (WHI) study showed in 2002 that postmenopausal women on HRT suffered more heart attacks and strokes than those on placebo control. The study gathered enough evidence to confirm that HRT increased the risk of cardiovascular disease and venous thromboembolism - blood clots that block veins and can cause stroke. 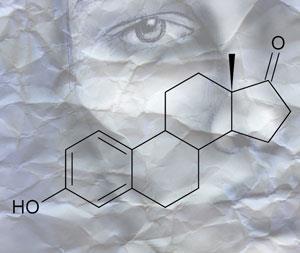 The oestrogen oestrone. In postmenopausal women more oestrone is present than oestradiol.

A study in the New England Journal of Medicine concluded that HRT was cardioprotective in younger women, but an accompanying editorial in the British Medical Journal said that the treatment had now come ’full circle’. Longer term use was no longer recommended, concluded the editorial, as ’negative outcomes outweigh the positive benefits’.

The author of the editorial, Helen Roberts, a lecturer in women’s health from the University of Auckland, New Zealand, said that the therapy was most useful for the treatment of menopausal symptoms such as hot flushes and vaginal dryness - which it was originally formulated for.

Roberts told Chemistry World that the WHI study had ignited debate in the medical community, with some researchers concluding that the conclusions were affected by the fact that older patients already had a higher risk of cardiovascular problems.

But, said Roberts, there is no evidence that continued use of the treatment would be beneficial even for younger hearts. ’On top of that the risk of stroke, the risk of blood clots and the risk of breast cancer all increase for women taking combined treatment, said Roberts. ’The bottom line is still the same - long term use of HRT is not a good idea.’