US and Japanese researchers have created an enzyme-like catalyst whose activity can be switched on or off using small molecules. Their work provides proof of principle for a dynamic catalyst system that could be applied in many industrially important reactions, as well as in medical diagnostics.

Developed by Chad Mirkin at Northwestern University, Illinois, and colleagues, the synthetic supramolecular complex is designed to catalyse the polymerisation of a cyclic ester called ?-caprolactone. What’s important though, says Mirkin, is the concept - using allosteric regulation to alter the structure of the complex, thus exposing a buried active site when it is activated. The researchers achieved this by incorporating ’hinges’ that swing open when chloride ions bind at an allosteric site and snap shut when a chloride withdrawing agent is added. 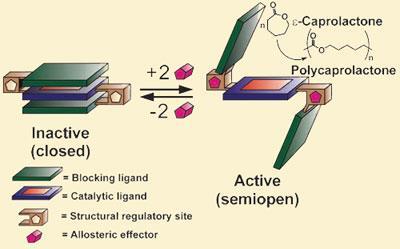 This is certainly an important benefit, agrees Joost Reek, who leads a supramolecular catalysis group at the University of Amsterdam in the Netherlands. ’If you look at all the industrial processes currently, they run on monometallic catalysts,’ he says.

But Mirkin has other ideas beyond industrial catalysis. He sees the work as a step towards novel detection systems based on what he terms ’synthetic PCR’. The polymerase chain reaction (PCR) is used in diagnostics to amplify a signal by producing millions of copies of a particular DNA fragment. According to Mirkin, the catalysts he and his team are developing could perform a similar trick.

A complex would, in theory, recognise a specific molecule leading it to switch to its active state and catalyse the production of more of that molecule. ’The beauty of it is that unlike PCR we’re not limited to nucleic acids,’ says Mirkin. ’You could begin to build structures designed to recognise almost any molecule.’

Reek thinks the work is a step towards this goal. But more immediately, he’s interested in the prospects for other complex catalyst systems. ’My view is that in the nearby future many people will look at multi-catalyst systems and catalysis in complex mixtures and for this reason, it would be good to develop catalysts that can be turned off and on,’ he says.