Studies on iridescent proteins found in the skin of squid are helping scientists to understand how the creatures change their appearance to camouflage themselves in the shifting light of the open ocean. The research probes the control mechanisms that squid use to turn these ’reflectin’ proteins on and off.

Reflectins, originally characterised in the Hawaiian bobtail squid,1 have sparked interest due to claims they could help create bioinspired materials such as invisibility cloaks. Only certain species of squid, however - including the longfin inshore squid - have this ability to control their reflectivity, a phenomenon known as dynamic iridescence. 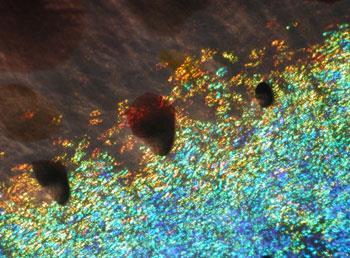 Alison Sweeney at the University of California, Santa Barbara, and colleagues studied reflectins in longfin inshore squid, and how their iridescence was mediated by the neurotransmitter acetylcholine.2 They found that adding acetylcholine to the proteins caused them to become decorated with phosphates. It is likely this leads to changes in the way the usually positively charged proteins are organised in the cell - switching on the iridescence.

’The phosphates provide negative charge and so you have neutralisation of charge and possibly induction of dipole across polymers,’ says Sweeney. ’They start agglomerating together, so that where you had diffuse polymers before, you now have aggregated polymers - you move from one charge driven interaction regime to another more organically driven regime and it’s that transition that appears to cause the change from not reflective to reflective.’ The organically driven regime, she explains, is probably a result of stacking interactions between aromatic protein residues - the team showed that the three reflectins they characterised contained unusually high levels of aromatic amino acids.

Matt Shawkey, who studies iridescence at the University of Akron, Ohio, US, says the study could also throw light on the evolution of non-dynamic iridescence in other animals - he suspects analogous changes in surface charge may have caused self-assembly of iridescent nanostructures in some birds’ feathers. These changes could then have been favoured by evolution.

But according to Peter Vukusic, a natural photonics expert at the University of Exeter in the UK, the work is exciting precisely because it focuses on dynamic iridescence. ’I could point to a thousand examples of static iridescence, but very few of colour change with short-term stimuli,’ he says. ’So the prospect that we could have an insight into how this structural colour system is dynamic, that for me is the interesting bit.’

The research could eventually lead to advances in materials for military applications, says Sweeney. Her team have already succeeded in using polymers to make a noiseless ’squid-esque’ shutter for an infrared camera, which turns from transparent to opaque when an electrical current is applied.