One lump or two?

Milk in tea could neutralise the drink's health benefits.

A splash of milk might make tea taste nicer, but it could neutralise the drink’s health benefits, German researchers have suggested.

Studies have shown that both green and black teas protect against heart disease, diabetes, arthritis, and even some forms of cancer. These effects are ascribed to tea’s antioxidant flavonoid compounds. 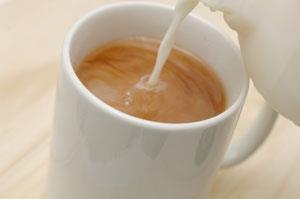 ’One lump or two’ takes on a more sinister note

In particular, explained lead researcher Verena Stangl, professor of cardiology at the Charit? Hospital, Berlin University of Medicine, tea’s polyphenols, such as epigallocatechin-3-gallate (EGCG), can relax and expand blood vessels, reducing the risk of clogged arteries and heart disease.

But adding milk to tea appears to counteract this effect, the scientists found. In their study, women who drank half a litre of freshly brewed black Darjeeling tea benefited from expanded arteries. But no such effect was found when, on separate occasions, the same women drank either black tea with 10 per cent milk, or boiled water alone.

Stangl’s team tested the effects of tea with individual milk proteins on isolated rat arteries in the laboratory. Though tea relaxed the arteries, milk’s casein proteins blocked that effect. Stangl surmised that the caseins might form complexes with tea catechins like EGCG, preventing them from interacting with the nitric oxide synthase enzymes responsible for relaxing blood vessels.

’Since milk appears to modify the biological activities of tea ingredients, it is likely that the anti-tumour effects of tea could be affected as well,’ warned Stangl, who drinks tea without milk because she prefers the taste.

It still isn’t clear whether milk’s blunting of tea’s short-term artery relaxation carries through to significant longer-term health effects. ’But our results provide a possible explanation for the lack of beneficial effects of tea on the risk of heart disease in the UK, a country where milk is usually added,’ Stangl said.