Ultra-thin batteries made by combining carbon nanotubes with paper

Scientists in the US have developed ultra-thin batteries by integrating carbon nanotubes into the structure of paper. Fully flexible and twistable while operating, it is hoped that these ’paper batteries’ could power the next generation of modern gadgets, including smart cards, displays and implantable medical devices.

A battery requires three components - electrodes, a separator and a liquid electrolyte. To charge a battery, electrical energy is applied to the electrodes causing positive and negative ions in the electrolyte to separate across an insulator. Carbon nanotubes are excellent electrical conductors and have found many uses as electrodes in recent years. Cellulose, the primary constituent of paper, has an insulating porous structure that is perfect for a separator.

The inspiration for combining these two ingredients came when postdoctoral students from three different laboratories at Rensselaer Polytechnic Institute, New York (working on biopolymers, nanotubes and electronics) came together to discuss their work. However, the team admitted that combining nanotubes and cellulose was not easy, because cellulose is insoluble in most common solvents. 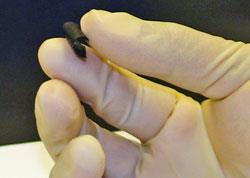 A sample of the new nanocomposite paper developed by researchers at Rensselaer Polytechnic Institute.

The problem was solved by using a room-temperature ionic liquid (RTIL) that can dissolve small amounts of cellulose when irradiated with microwaves. Luckily, RTILs can also act as electrolytes - the final component of the battery. Vertically aligned carbon nanotubes were grown and soaked in the cellulose solution, before the excess RTIL was removed. The resulting ’nanocomposite’ paper was peeled away at a thickness of about 30 microns, about a third the thickness of an average sheet of paper.

Two pieces of the nanocomposite paper were bonded back-to-back and laminated to make a supercapacitor device, which was found to have comparable power density to commercial supercapacitors and other flexible devices. In addition, the device worked with a variety of different electrolytes, including blood and sweat - indicating that these batteries could be safely put to medical uses.

Robert Linhardt, who worked on the project, told Chemistry World: ’Our device looks and feels just like a piece of black paper, the dark colour coming from the millions of carbon nanotubes packed into the cellulose structure. It also has good biocompatibility making it potentially useful as implantable power supply for pacemakers or insulin pumps.’

Although nanotubes are expensive at the moment, Linhardt and his colleagues have high hopes for the future of these materials: ’We will continue to optimize the energy storage, decrease their resistance and then make and test larger devices for reliability and safety.’