Osmium and pyridine ring together

Organic chemists in China have found a way to put osmium into a pyridine ring - leading to the synthesis of the first metallapyridinium complex. The reaction makes use of the classic ring-forming Diels-Alder reaction, so there is great potential to extend this process to other metals and compounds, the researchers say.

Trapping metals in aromatic rings is a field of intense study - and although there are many examples of metallabenzenes, hetero-aromatic rings containing both metal atoms and nitrogen or oxygen atoms are rare. Although the new method is not yet refined, it could provide access to interesting new metallacycles.

The team, based at Xiamen University in China, employed a formal [4+2] cycloaddition with acetonitrile as the dienophile partner and an osmium carbyne complex (containing a metal-carbon triple bond conjugated with a carbon-carbon double bond) acting as the ’diene’.

Under the reaction conditions, a hydride migrates from the osmium centre to the adjacent carbon atom to form an osmadiene. This then undergoes the cycloaddition reaction with acetonitrile’s carbon-nitrogen triple bond. The result of this hetero-Diels-Alder reaction is a six-membered aromatic ring, with the metal bonded to the nitrogen atom. The team found that they could easily interconvert between this protonated ’osmapyridinium’ complex and the deprotonated ’osmapyridine’ by adding strong base or acid. 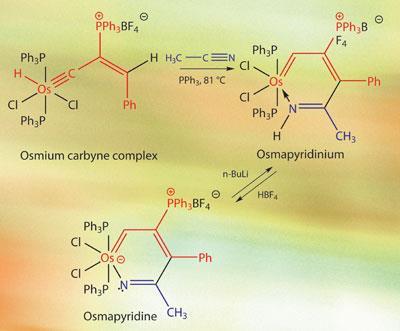 The osmium carbyne reacts with acetonitrile to form the first metallapyridinium complex. Deprotonation of the complex then gives the first osmapyridine compound.

The reaction conditions are also quite mild - the two compounds were combined and warmed for four hours in the presence of triphenylphosphine, giving an  84 per cent yield of the brown metallapyridinium. Treating this with butyllithium at 0?C gave bright red crystals of the metallopyridine.

’This is really a great result,’ says Michael Haley, an expert on metalla-aromatic chemistry at the University of Oregon in Eugene, US. ’The chemistry is well executed and the products are beautifully characterised.’

’But the million dollar question is whether or not it can be extended to other systems,’ adds Haley. If so, he says, it could be an easy way to make new compounds with interesting properties.