Outwitting the doping cheats of the future

Biochemists at the German Sport University in Cologne have developed an anti-doping test for a drug candidate in early development that may counteract muscle fatigue and potentially enhance athletic performance. They believe that it might already have been used by athletes, possibly in the last summer’s Beijing Olympics.

The test can spot benzothiazepine - the core chemical structure of the potential drug candidates JTV519 and S107. These compounds have been tested in mice, but not yet humans, for treating heart abnormalities. A paper published early last year in the Proceedings of the National Academy of Sciences  described increased endurance of mice with both drugs. 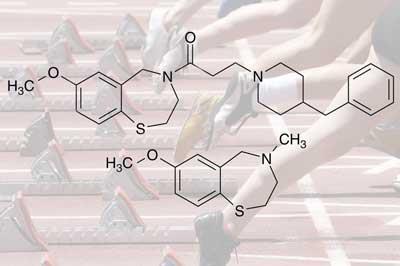 Benzothiazepine is the core chemical structure of JTV519 (top) and S107

’If it works in mice it would also work in humans,’ says Mario Thevis, from the university’s centre for preventive doping research. He told Chemistry World that after seeing this paper he and colleagues at the university’s institute of biochemistry - which is accredited for doping analysis by the International Olympic Committee - decided it would be worthwhile to develop a test to detect the compounds.

The compounds stabilise protein channels that would otherwise ’leak’ calcium from muscle cells during strenuous exercise. Calcium is needed for muscle contraction and this ’leaking’ effect weakens the contractions and is a causal factor in muscle fatigue.

The first step in developing a new test was to obtain samples of the drugs, whose structures have been published. ’We gave our organic chemistry department the structures and they said, "We can do that for you",’ he says. The process is simple, requiring four or five steps and lasting about a week, and could easily be accomplished in an underground doping lab selling to the black market, he adds.

The team characterised the compounds according to weight and molecular structure. With this information, they formulated a molecular ’fingerprint’ to detect the compounds at concentrations as low as 0.1 nanograms per millilitre in urine or blood using high resolution mass spectrometry, which Thevis said was their main tool. Details of the team’s work were published in the journal Drug Testing and Analysis.

If the World Anti-Doping Agency’s (WADA) adds benzothiazepines to its prohibited list, Thevis says his team’s test could be tagged onto the existing testing regime used around the world within about ’one day.’

The Beijing Olympics officially were relatively drug free, with only six athletes caught for doping during the games and three other suspected cases identified after the games closed. However, some believe many athletes were using performance-enhancing drugs that could not be detected using standard tests.

Noting that many doping agents used by athletes are drugs developed by pharmaceutical firms for legitimate medical treatments, Thevis says 10 years ago doping tests normally detected only drugs already approved for sale. But as doping prevention officials have intensified efforts to keep tests as up-to-date as possible, cheating athletes and the doping black market have attempted to find drugs earlier in the development process.

In an interview with Chemistry World, Olivier Rabin, science director at the WADA, says that S107 ’is certainly in our scope of interest.’ The drug is, however, still in early development, just entering Phase 1 trials, and is a few years from market this is if it actually makes it to market, he adds.

Normally, but not always, WADA would not seek information from the pharmaceutical firm developing a potential doping drug until Phase 2 trials, he says, adding that the drug is still being formulated in Phase 1 and therefore subject to change.

Referring to S107, he says: ’It is being discussed by the (prohibited) list committee. A decision will be taken as we move along.’