New catalysts to simplify and clean up routes to useful chemicals

A new ’green’ strategy for making useful nitrogen-based chemicals has been announced by chemists in the UK. In a process that is ’similar to an enzyme’ according to Robert Raja, lead researcher on the project, compounds such as niacin (vitamin B3) could be made without using aggressive oxidising agents - potentially saving many tonnes of inorganic waste.

The strategy combines a stable oxygen source, acetyl peroxyborate (APB), with a large catalyst developed by the team. The catalyst consists of a framework of manganese ions and microporous aluminophosphate - creating ’active centres’ inside each of the pores in the structure. The reactants must enter the pores in order to react, but doing so restricts their orientation and they are therefore oxidised selectively. 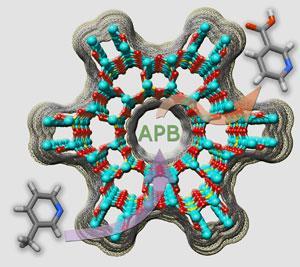 ’The microporosity of the catalyst plays a major role in influencing the shape-selectivity and regio-specificity of the reactions,’ said Raja. ’Importantly, the active oxygen is also released at the same site within the crystalline framework.’

Raja’s team demonstrated their strategy by selectively oxidising some simple starting materials, such as 3-picoline. In a single-step, they were able to make compounds that are widely used in the pharmaceutical and agrochemical industries, including a variety of pyrimidines, pyridazines and 4-methyl quinoline.

Crucially, the researchers say, the ’E factor’ (which compares the mass of waste with the mass of desired product) is ten times lower than the fine-chemical industry standard, demonstrating that this process is environmentally friendly. The reaction also doesn’t require an organic solvent - it works fine in simple distilled water.

Using the new catalyst should not make the process any more expensive, Raja says. Typical reactions only require small amounts of catalyst and it can easily be recycled and used again. And APB is easier to handle and store than other oxidants such as hydrogen peroxide.

The researchers are confident that by varying the size of the pores and adjusting reaction conditions, this strategy could be applied to an even wider range of reactions in the future.

’This research is a clever demonstration of a new system for enhanced synthetic control,’ says Justin Notestein, who designs similar catalysts at Northwestern University, Illinois, US. ’

I eagerly await further mechanistic studies that will demonstrate exactly how this unique oxidant and catalyst combine to produce the observed selectivities,’ Notestein added. ’I can see how a deeper understanding of the origin of the reactivity and selectivity could lead to a broad generality for this system.’