The world’s first coal-fired power station to capture and store its own carbon dioxide emissions was launched on 9 September by Swedish power company Vattenfall in the north-eastern German city of Spremberg.

The 30MW pilot project - dwarfed by its neighbouring 1600MW Schwarze Pumpe power station - was built to test a new carbon capture technology. Its boiler burns lignite in an atmosphere of almost pure oxygen, instead of air. This ’oxyfuel’ process creates a waste stream of carbon dioxide and water, from which it is relatively easy to capture CO2.

By contrast, scrubbing CO2 from the impure waste stream produced after coal is burned in air (as in traditional post-combustion carbon capture) is a very energy-intensive and costly process. An oxyfuel plant does expend energy in separating nitrogen and other impurities from air, however. 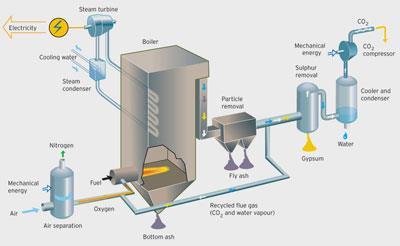 Vattenfall have spent 70 million euros (?56 million) on the project, and consider it a research investment rather than a commercial opportunity. ’We’re burning money and gaining knowledge,’ says Staffan Gatze, the company’s spokesman on carbon capture and storage.

From the first quarter of 2009, four or five lorries will queue up every day at the plant to carry liquefied carbon dioxide 200 miles north, where it will be injected 3000 metres below ground at the on-shore Altmark depleted gas field. A commercial form of this process would use pipelines to transport CO2, Gatze says.

The company hopes its prototype will firm up comparisons between oxyfuel and post-combustion capture, and the third option, pre-combustion capture - where fossil fuel is processed to a synthesis gas from which CO2 is removed before the remaining hydrogen is burned.

Several other mini oxyfuel pilots are planned which will also demonstrate the complete chain of carbon capture and storage, in France and Australia. Vattenfall plans to demonstrate oxyfuel on a commercial scale in one of the boilers of a plant in Janschwalde, Germany, by 2013; a parallel boiler will demonstrate post-combustion capture.

Meanwhile, the European Commission has taken another step towards its intention of supporting a European network of around a dozen CCS demonstration projects by 2015. It wants organisations who are interested in coordinating such a network to submit tenders for the contract by 6 October.