Ingenious fluorescence microscopy experiments have revealed palladium atoms’ liberated behaviour, helping answer unresolved questions about an important process for forming bonds between carbon atoms. The Suzuki–Miyaura cross-coupling won Akira Suzuki a Nobel prize in chemistry in 2010, but there has been debate about whether solid palladium catalysts are dissolving or not.

Tito Scaiano’s team at the University of Ottawa found that palladium atoms dissolve and leach away from other atoms in nanoparticles, but then land back on the surface of their supporting material. These redeposited palladium atoms are active sites for the carbon–carbon bond formation process, explains Paolo Costa, first author on the new paper.

Industrially, the Suzuki–Miyaura reaction is ‘frequently used for the synthesis of essential drugs’, says Costa. Industry finds it easier to isolate and reuse solid catalysts than work with soluble versions. But this raises the question of whether the carbon–carbon bond formation reaction happens on the catalyst surface, or whether the catalyst dissolves and potentially leaches away. ‘Finding the correct answer is important since leaching processes often result in unwanted traces of toxic metal in drugs, raising the operating costs for purification and catalyst recovery,’ Costa says.

At first Scaiano, Costa and their colleague Deborah Sandrin used non-microscopy methods to distinguish whether solid or dissolved palladium was the active catalyst. Some of their results suggested mechanisms occurring at the palladium nanoparticle surface, while others indicated a leaching process.

Scaiano’s group then used total internal reflectance fluorescence (Tirf) microscopy to directly study the atoms at work. In this process they shine specific wavelengths of laser light across a region 100–200nm above a microscope slide that contains mixtures including fluorescent dyes. The microscope detects the resulting fluorescence in high resolution, potentially down to around 20nm pixel sizes and captures events occurring on timescales of 100ms. That’s enough to capture important details about catalyst behaviour.

A surprise slides in

To study the Suzuki–Miyaura reaction, the Ottawa team designed a novel chemical system. They started with a molecule that fluoresces green, which has two bromine atoms that enable it to participate in carbon–carbon bond formation reactions. Adding 2-thienylboronic acid can make a monosubstituted molecule, and then a disubstituted one, which fluoresces red. Using Tirf the chemists tracked when they saw the products form, and where.

Tirf microscopy shows the presence of the starting material, in green, and the formation of products after Suzuki–Miyaura cross coupling reactions in red 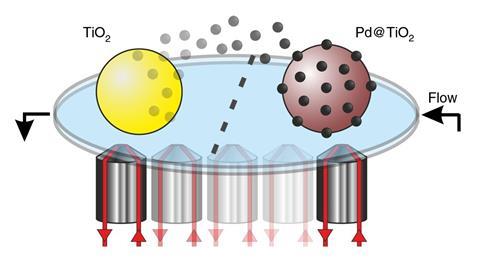 Vivek Polshettiwar, from the Tata Institute of Fundamental Research (TIFR) in Mumbai, India, says that leached palladium atoms becoming active sites after attachment back to catalyst supports ‘is indeed an exciting finding’. ‘Most heterogeneous catalysts for Suzuki coupling use amine or thiol functionalised supports before loading palladium,’ adds Polshettiwar. This generally significantly reduces leaching, he notes. ‘It will be interesting to know if these systems also follow the same mechanism.’