Researchers have developed a catalyst that efficiently converts toluene into a useful industrial intermediate in a much greener process than traditional methods. In the future, the technique could be scaled up for industrial use, they say.

A team led by Graham Hutchings at Cardiff University in the UK has now converted toluene to benzyl benzoate catalysed by nanoparticles of a gold-palladium (Au-Pd) alloy supported on carbon (Au-Pd/C) or titania (Au-Pd/TiO2). The reaction, which took place under mild and solventless conditions, showed very high selectivity and generated benzyl benzoate in yields as high as 95 per cent.

Benzyl benzoate is a versatile intermediate in many processes, used for example in pharmaceuticals, solvents, plasticisers and perfumes. However, methods to produce the compound are hampered by environmentally unfriendly reagents or low conversion rates to obtain the clean product.

By making colloid particles containing both gold and palladium nanoparticles of 3-4nm in size, and then supporting them on carbon or titania, the team produced a modified version of a Au-Pd catalyst that is a known oxidising catalyst.

Hutchings explains that the traditional Au-Pd catalyst normally contains nanoparticles in the range of 6-20nm, but the smaller nanoparticles used in the new method were the key to success. ’We got a really active catalyst and were able to get high levels of conversions,’ he says. ’It is a very neat example of activation of a primary C-H bond and forming a very selective product.’

The toluene is activated by the catalyst to form benzyl alcohol which is oxidised to form benzaldehyde. Benzyl alcohol and benzaldehyde then interact to form a hemiacetal - a species formed when an alcohol and a carbonyl group on separate compounds react. The hemiacetal is then oxidised to form the benzyl benzoate, with trace amounts of impurities. 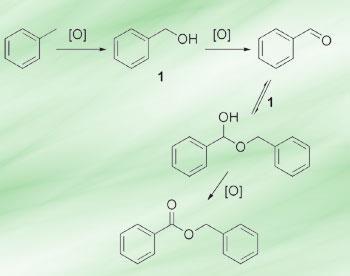 The high yielding route could be scaled up for industrial use

The team also found that the catalyst support had an effect on the reaction. ’The Au-Pd/C catalyst is almost twice as active as the Au-Pd/TiO2 catalyst, and we were able to show using electron microscopy the morphological effects as to why that was,’ Hutchings tells Chemistry World.

They found that the Au-Pd nanoparticles on the TiO2 formed an extended flat interface, whereas the nanoparticles on the carbon were rougher with a higher number of low coordination number edges/positions. If these edges are the active sites for toluene oxidation, it could explain the different activities of the catalysts.

’It is anticipated that this system will have many applications and the catalyst will become an essential oxidising agent for chemistry with uses in pharmaceutical chemistry and organic synthesis,’ says Matthew Jones, an expert in heterogeneous catalysis at the University of Bath in the UK. ’The advantage of this system is that it does not use any environmentally unfriendly reagents to oxidise the toluene - whereas current industrial processes do,’ he adds.

’We are pretty confident that the reaction could be scaled up into a standard stirred pot reactor for industrial use,’ says Hutchings. ’There is no reason why you couldn’t do this on a much larger scale.’