Researchers have developed a paper-based colour-changing sensor to detect organophosphate pesticides and other acetylcholinesterase (AChE) inhibitors in food and drink samples. John Brennan and colleagues at McMaster University in Canada have developed a simple reagentless device that detects nanomolar quantities of pesticides within five minutes in samples like milk and lettuce.

Paper is an appealing material for analytical devices because it is relatively cheap, abundant, and can move fluids by capillary action without external power. A recent focus on paper-based, colour change-based diagnostic platforms has emerged because they may be useful in locations where resources are limited.

Brennan’s team used AChE as a reporter because it is inhibited by pesticides such as organophosphates and carbamates. ’Organophosphates are still used in the developing world for spraying agricultural crops,’ explains Brennan. ’The AChE-based sensor has the potential to provide rapid testing for organophosphates in the field.’ 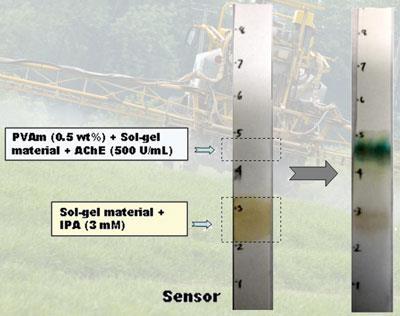 The colour change obtained using the paper-based sensor is clear in the proof of concept study above, and occurred in a matter of seconds

Piezoelectric inkjet printing is used to deposit reagents on a paper-based support to prepare it for use, so that additional reagents aren’t needed at the time of analysis. AChE and a colour-changing substrate, indophenyl acetate (IPA), were trapped in two separate zones on  a 1 ? 10 cm paper strip using biocompatible sol-gel derived silica inks, with the enzyme trapped in a sensing zone and the IPA held in a substrate zone.

To test a sample, the end of the paper sensor is placed in the sample solution, which flows via capillary action to the sensing zone where it is left to incubate. Then, the opposite end of the sensor is dipped into distilled deionised water so that flow in the opposite direction pushes the IPA from the substrate zone to the sensing area. There, the AChE hydrolyses the IPA, creating a colour change from yellow to blue. The intensity of the blue colour observed (either by the naked eye or with a digital camera) is inversely proportional to the amount of pesticide in the sample.  Brennan says the bidirectional flow approach significantly improves the detection limits because it lets the analytes incubate in the AChE-sensing zone before the IPA appears.

The team tested the method on ’real-life’ foodstuffs such as milk and apple juice that had been spiked with pesticide and found that the paper-based sensor was effective in detecting the contaminants. When they tested swabs taken from apples sprayed with pesticides, the paper-based assay results were comparable to conventional mass spectrometry methods.

’Competitive assays where the analyte decreases, rather than increases, the signal have traditionally been less explored for paper-based tests than direct assays,’ says Samuel Sia of the biomedical engineering department at Columbia University, US.

The researchers hope that their approach can be used for rapid screening for trace levels of pesticide in environmental and food samples in the field. However, although the device has a shelf-life of at least a month when stored at 4?C, Sia points out that this could still be a stumbling block in some situations, as storage at 4?C is simply ’not feasible in many remote settings’.