Parent oxazine made for the first time

After years of trying, scientists have finally isolated 1,4-oxazine.1 Among the many possible 6-membered fully unsaturated parent heterocycles containing one group 15 and one group 16 atom, 1,4-oxazine is the first to be generated and spectroscopically characterised. The closest molecule to be made in the past was a monosubstituted oxazine.2 Now, Alan Aitken and colleagues at the University of St Andrews in the UK have used flash vacuum pyrolysis to remove the N-tert-butoxycarbonyl group from the previous attempt and taken the synthesis all the way to 1,4-oxazine. Unsurprisingly, being a non-aromatic system, 1,4-oxazine is very unstable. 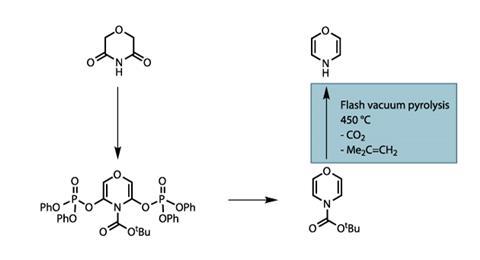 Libraries of small molecules are central to screening processes in biomedical research and this work could aid wider efforts attempting to expand those libraries by developing synthetic routes to nitrogen-containing heterocyclic scaffolds.