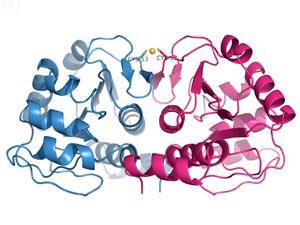 Structure of the copper binding site in DJ-1

Scientists from the UK have identified a possible cause for the oxidative stress found in patients with Parkinson’s disease. A group led by Mark Odell at the University of Westminster has revealed that a single cysteine mutation in the protein DJ-1 could decrease the body’s defences against oxidative stress and increase copper cytotoxicity.

It’s recently been suggested that DJ-1 protects against oxidative stress by supplying a copper ion to a metalloenzyme (SOD1) that destroys free superoxide radicals in the body. But how DJ-1 could do this was previously unknown. Odell’s team used X-ray crystallography to look at the structure of the protein bound to copper.

As the backbone structure shows, the copper ion is bound between two cysteine residues – one in each subunit of the DJ-1 homodimer. If just one of these residues is compromised by a Parkinson’s induced mutation, Copper can no longer be sequestered by the protein. That means that copper remains in the cell and SOD1 is unable counter oxidative stress.