Self-assembling polymers hold key to computer components of the future

Breakthroughs in controlling the way polymers self-assemble on surfaces could be key to making the next generation of computer components, say two teams in the US. The researchers have developed new ways to generate dense patterns of repeating polymer arrays, with unprecedented accuracy.

Although the technology has not yet been developed to form the complex lines required for integrated circuits, these periodic patterns could be ideal templates for high capacity hard disk drives, and are the first step towards many other applications.

Using polymer self-assembly to pattern surfaces could replace optical lithography, which has been used to make integrated circuits for the past fifty years but is now reaching its technical limit. Optical lithography forms patterns with light, but cannot produce features smaller than the diffraction limit of the wavelength of light being used. Since using smaller wavelengths of light is becoming prohibitively expensive, other techniques are being considered to continue making smaller structures.

’The two components of the block copolymer are immiscible, like oil and water,’ says Thomas Albrecht, who managed the project at Hitachi’s San Jose Research Center in California.1 ’They want to separate out but they are covalently bonded together so they form an ordered periodic nanostructure instead.’

Previously, controlling this order has been difficult across large areas, as the self-assembling components are prone to forming defects. To achieve a regular pattern, Albrecht’s team used an electron beam to write a template of tiny dots on a silicon plate. A thin film of poly(styrene-block-methylmethacrylate) was then added to the template and annealed - resulting in spots of polymethylmethacrylate surrounded by polystyrene. Since the spots bind preferentially to the chemically modified dots, the template acts as a guide for the polymer to self-assemble. 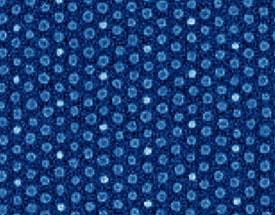 Whereas Albrecht’s team focused on making marks on the surface, a team based at the Massachusetts Institute of Technology investigated using topographical features instead.2 The team used an electron beam to create silicon oxide nanopillars at regular intervals on a silicon surface. These pillars are then ’brushed’ with a polymer coating, effectively fooling the self-assembling polymer into treating them like regular spots in the polymer matrix.

’We construct a sparse array of guiding features and nature does the rest, spontaneously filling in the gaps,’ says Ion Bita, a member of the MIT team, noting that a single pillar could template up to 20 polymer spots. The team also found that changing the distance between the pillars causes the polymer to stretch to fit the new distances, resulting in growth at particular angles on the surface of the silicon wafer. ’This control over the placement and orientation of the self-assembled nanostructure offers tremendous potential for applications of self-assembly in microelectronics,’ Bita told Chemistry World.

’For practical applications, it isn’t necessarily the size of the features that is the most important thing - it is getting them packed into a regular array,’ says Richard Register, an expert on polymer research at Princeton University in New Jersey. ’This research demonstrates the possibility of making perfectly ordered structures with a periodicity far smaller than you can get with any other techniques.’

The ultimate goal of these projects is to make a perfect polymer-based ’master template’, from which inorganic silicon copies can be made. This would allow hard drives to be made with more than 1013 dots across the surface, each dot corresponding to a single ’bit’ of information.

The highest capacity hard drives on the market can currently store about 250 billion bits per square inch of disk surface, but with self-assembling polymer technology this could be boosted to well over a terabit (one trillion bits) per square inch, possibly within the next two or three years, says Albrecht.

Even smaller patterns may be possible using block copolymers with shorter chains, and it is also likely that templates can be developed that require fewer guiding spots or pillars, reducing the demands on the electron beam lithography used in the process. 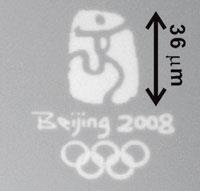 15,000 miniaturized duplicates of the 2008 Beijing Olympic logo can fit into a single square centimetre

In related work, Chad Mirkin and colleagues at Northwestern University in Illinois have developed polymer-based arrays containing millions of nano-scale ’pens’,3 which could also find application for next-generation computer components. These pyramid-shaped pens can be dipped into a variety of different ’inks’ - including nanoparticles, sol gels or other materials - and then stamped onto surfaces. By controlling how hard the pens are pressed against the surface, the thickness of the marks can be tailored.

To demonstrate the potential of their technology, Mirkin’s team used gold nanoparticles to print 15,000 copies of the Beijing Olympics 2008 logo in only one square centimetre.

’The pyramids are made from elastomers and hence can be produced at very low cost,’ Mirkin says. ’We can produce integrated circuits, gene chips or protein arrays with this process - hopefully providing a cheap microfabrication solution for researchers or commercial applications.’

Enjoy this story? Spread the word using the ’tools’ menu on the left .