A new study has thrown light on the processes that form organic molecules called polyynes in the atmosphere of Titan, Saturn’s largest moon. The research could help explain what makes up the moon’s characteristic orange haze.

Titan fascinates astrobiologists and chemists alike due to its complex organic chemistry. 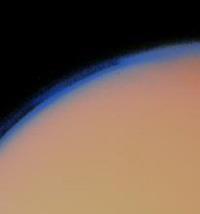 A recent spate of interest in the satellite has been fuelled by data from the Cassini-Huygens spacecraft, which has completed numerous flybys of Titan on its tour of the Saturn system. But one issue that has continued to intrigue scientists for over 20 years is the composition of the layers of orange haze that shield Titan’s surface from the sun.

According to Ralf Kaiser of the University of Hawaii at Manoa, most existing models for predicting the composition of the haze are inaccurate. ’The problem is that all these older models lack very good laboratory data, because most of this laboratory data has been extrapolated,’ he says. ’For example, there have been many models predicting how benzene can be formed, but most of the reaction input parameters have been borrowed from combustion chemistry and because Titan is a very low-temperature environment, combustion models don’t always apply.’

Previously, scientists had suggested that photochemical reactions in Titan’s atmosphere generated ethynyl radicals ?that react with hydrocarbons to form the haze. Kaiser, working with a team from the US and Taiwan, pulled together data from lab experiments, theoretical work and models to pin down the mechanism.

The team used a molecular beam machine to send single ethynyl radicals and diacetylene molecules crashing into each other. Analysis of the products of this experiment indicated that the polyyne triacetylene was being formed. The researchers then carried out electronic structure calculations and created a new model to show that the reaction would be feasible in Titan’s cold atmosphere - the fact that it is exothermic and has no activation barrier supported the idea. 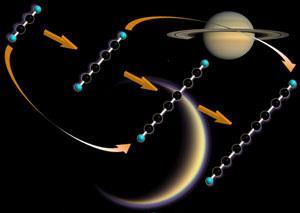 Andrew Coates of University College London, who designed instruments for Cassini, thinks the findings may help explain measurements taken by the probe. ’One of the real surprises from the Cassini mission was our observation of heavy negative ions that seem to be made in Titan’s high atmosphere. One possibility for the build up of mass may be via polyynes, where we do see some negative ions, so this new research may be helping us understand more about Titan’s haze,’ he says.

Kaiser says the work on polyynes is just the first step - the next is trying to understand how polycyclic aromatic hydrocarbons (PAHs) could be formed. ’When we have this set of data, then we can compare objectively if polyynes or PAHs contribute to the haze layers, or both.’