Transparent nanospheres self-assembled from a simple protected dipeptide molecule have become the stiffest organic materials yet reported. The team of Israeli researchers who produced the spheres found that their mechanical properties surpassed those of steel and the organic armour material Kevlar.

’When we applied force to measure these particles, diamond probes were the only thing that actually made an indentation,’ explained Itay Rousso, from the Weizmann Institute of Science in Rehovot. ’It’s quite astonishing that you can get such a strong material made of biological ingredients.’ 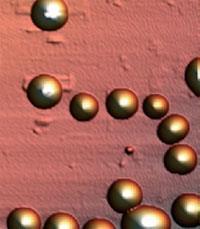 AFM images of the nanospheres

The scientists, led by Rousso and Tel Aviv University’s Ehud Gazit, say such nanostructures hold great promise for strengthening composites. They suggest potential applications from ’far-fetched ideas such as the "space elevator"’ to medical implants. ’These spheres can be used as reinforcement materials,’ Rousso told Chemistry World, ’but there is a large gap between discovery and usage.’

The team produced the spheres from N-tert-butoxycarbonyl (Boc)-protected diphenylalanine, which in unprotected form is the core of the beta-amyloid protein that accumulates to produce plaques in the brain in Alzheimer’s disease. Gazit had previously made self-assembled nanotubes from this protected dipeptide, and by slightly changing the assembly conditions Gazit’s student Lihi Adler-Abramovich obtained spheres whose Young’s modulus (a measure of a material’s stiffness) was an order of magnitude higher.

The spheres’ diameters ranged from 30nm to 2um, with cavities inside whose dimensions the Israeli scientists couldn’t determine. While basic measured stiffness varies with material thickness, Young’s modulus doesn’t, so Gazit and Rousso enlisted colleagues from Ben-Gurion University to simulate this property. 1um diameter particles where the dipeptide shell was 0.4um thick had a 275GPa Young’s modulus, compared to 130GPa for Kevlar and around 200GPa for steel.

Rousso and Gazit think that, like Kevlar, the material’s strength largely derives from the molecules’ planar form and interactions between their aromatic side chains’ pi-electrons, but this remains unconfirmed. ’It’s an open question, what gives rise to these extreme mechanical properties, but the spheres are very highly ordered,’ Rousso said.

Kenneth Woycechowsky, who researches protein assembly at the University of Utah, US, notes that the nanospheres’ structure is also likely to depend on pH, potentially limiting where they can be used. ’On the other hand, this built-in molecular switch may present useful opportunities for creating   smart materials,’ Woycechowsky says. ’Regardless, Gazit, Rousso, and coworkers have made an amazing discovery.’