Synthesising arrays of short peptides could soon be as easy as printing them out - thanks to the development of a modified laser printer that uses amino acids instead of coloured ink. The new printer is able to print 160,000 different peptides on a single sheet of glass in a process that is faster than conventional methods and a fraction of the price.

This development should aid the manufacture of cheap peptide screens that can be used to search for interactions between short peptides and important proteins - such as those in pathogens, cancer cells or viruses - in order to develop new treatments.

The printer was created by the teams of Ralf Bischoff and Frank Breitling at the Fraunhofer Institute in Stuttgart and German Cancer Research Center (DKFZ) in Heidelberg, who were awarded the prestigious Stifterverband (Germany’s donors’ association for sciences and the humanities) Science Prize for 2008 in May at the annual Fraunhofer Society conference.

The process works by printing thousands of spots of amino acids - and then re-printing the next set of spots directly on top. This gradually builds up the different peptide chains. After each layer of printing, the slide is treated by the standard Merrifield coupling process that joins the amino acids together. Through this repeated process of printing and coupling, peptides up to 11 amino acids long can be made on each individual spot. 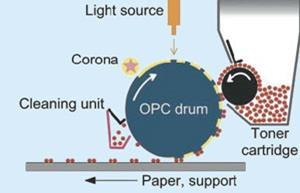 The modified printer can create arrays of peptides quickly and cheaply

The process relies on specially made ’amino acid inks’. Instead of the four coloured ’inks’ or toners usually found in a printer, this process uses twenty - one for each of the amino acids commonly found in proteins. These special toners are made by ’freezing’ the amino acids into a solid matrix, allowing them to be laser-printed in the same way as the ink particles found in normal toners. After printing, the slide is heated and the solid matrix melts, allowing the Merrifield coupling reaction to take place.

Whereas conventional methods use robots to spot individual amino acids onto a membrane - limiting the resolution to 10,000 spots on a 20cm glass slide - the new process is able to directly print 160,000 spots in the same area. This increased efficiency dramatically reduces the price from around ?4 per spot to only a few pennies. ’But this is only the beginning,’ says Breitling.

’At first we tried to convince some of the major printer manufacturers to help us, but none of them were willing to,’ Breitling told Chemistry World. ’So we basically had to re-create a laser printer from scratch. The next generation of this technology should be able to print at least four times more peptides in the same area - maybe even a million peptides on a single sheet.’

’This is a very interesting concept and the stability of the solid solvent is surprising,’ says Paul Sheppard, an expert in peptide synthesis at BIOMOL International, a speciality biochemicals supplier. ’But I suspect this process has a long way to go before it is as robust and trustworthy as current methods.’