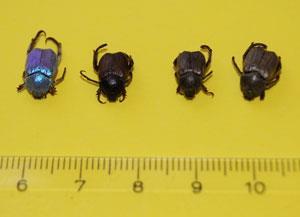 Scientists in Germany have successfully preserved delicate structural details in scarab beetles by using an ionic polymer to drive carbonisation. Due to their fossil-like and stable carbon structure, the specimens are anticipated to last for thousands of years.

Jiayin Yuan, who led the study at the Max Planck Institute of Colloids and Interfaces, explains how his team discovered the technique: ‘In the past year we began to investigate interactions between poly(ionic liquid)s [PILs] and natural matrixes like cotton. Cotton coated with PIL and carbonised was thermally stable and its natural bio-matrix was preserved. For this reason, and motivated by an intrinsic curiosity typical of us scientists, we wanted to explore and push forward this effect to its limit.’

PILs are a new type of charged polymer of increasing interest. Their high surface activity means they can replicate the microscale patterns in biological structures, and their high nitrogen content following carbonisation makes the material more inert and stable than normal, non-doped amorphous carbon material. Also, heteroatoms, such as nitrogen, sulfur, phosphorus and boron, within their molecular structure mean PILs have a high oxidation resistance, important for preserving biostructures.

The Hoplia coerulea beetle was chosen because its scales show structural, photonic colour, and its delicate legs allow for mechanical stability and replication of detail to be assessed following carbonisation. Its exoskeleton is made from chitin – one of the most abundant polysaccharides in the world and a material already used as a carbon precursor in other experiments.

The dead beetles were coated with a PIL layer before being pyrolysed at 400°C in a nitrogen atmosphere. A polymer coating forms on the surface of the beetles, which turns into a thin layer of protective carbon after pyrolysis, and the high nitrogen content in the carbon matrix improves oxidation resistance. Yuan explains that in traditional preservation techniques, aging and structural degradation of intrinsic biological components would occur after a few decades.

Although the colour is lost upon coating, the scientists are interested in preserving structures that lead to these colours

Materials chemist Robin White, from the University of Freiburg in Germany, says the work has the potential to ‘replicate and preserve complicated structural motifs of a range of structures at different length scales, and perhaps has an interesting use in natural fabric, membrane or electrode coatings.’