Pharmaceutical promise in the desert 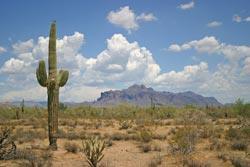 Researchers hunting for natural products with pharmaceutical promise tend to head for biodiverse environments, such as tropical oceans or rainforests. But researchers in Arizona hypothesised that organisms living in the desert will have evolved biochemical systems to function in extreme conditions. The biochemicals involved might have activity in other stressful environments, such as disease.

The researchers screened extracts from more than 500 fungi associated with plants growing in the Sonoran Desert in the south west of the US. The team used a series of bioassays to test the inhibitory properties of the extracts against heat-shock protein 90 (hsp90), which is a key molecule in metabolic and signalling pathways in cancerous cells. The protein protects cells from environmental stress.

’We eventually isolated two compounds which inhibited hsp90; one from a microbe associated with a plant called Mormon tea, and the other associated with the Christmas cactus,’ said Leslie Gunatilaka, director of the Southwest Center for Natural Products Research and Commercialization at the University of Arizona.

The compounds, radicicol and monicillin I, were shown to bind to hsp90 in vitro, and significantly reduced proliferation of cancer cells in culture. The researchers synthesised a range of analogues of the compounds, and several of these exhibited similar activity.

’Cancer cells are highly stressed, and hsp90 and other heat shock proteins help the cells to tolerate stress and are therefore potential targets for drugs,’ Gunatilaka told Chemistry World.

The team recently isolated withaferin A, a steroidal lactone, from the plant Withania somnifera, also found in arid environments. The plant has been used in medicinal preparations for centuries in Ayurvedic medicine in India. The researchers demonstrated for the first time the mechanism by which withaferin A alters cytoskeletal architecture.

The research team is continuing to scour the desert environment for other compounds and is attempting to manipulate desert-derived microorganism in the laboratory to investigate whether the microbes will produce compounds that might act as modulators of stress.

’Here in Arizona, daytime temperatures can reach 50oC, and most of us run for the shade or head for the nearest air-conditioning unit,’ Gunatilaka said. ’There can be differences in temperature of 20oC between night and day. Organisms living under these conditions need to have special adaptations. While these conditions are not especially friendly to life, there are organisms that survive here and tolerate stresses in terms of heat, water and salt. We have found a surprisingly rich and diverse range of microorganisms to be associated with plant communities indigenous to this region. We believe they might yield many interesting new compounds useful in arid land agriculture and treating diseases.’ Simon Hadlington