Understanding biological water oxidation is central to achieving artificial photosynthesis and providing cheap and efficient hydrogen production. However, cracking the mystery of such a complex system has resulted in two competing oxidation state schemes, accompanied by controversy and debate over which is correct. Now, Dimitrios Pantazis, of the Max Planck Institute for Chemical Energy Conversion in Germany, and his colleagues feel they have proven one scheme more valid than the other.1 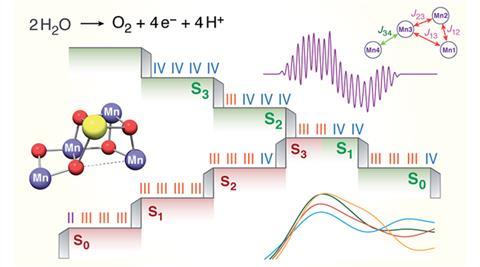 Historically, two competing schemes have described the sequence of oxidation states of the four manganese ions

Artificial photosynthesis relies on the creation of efficient and stable water-oxidising photocatalysts, preferably ones made of earth abundant materials. Biological catalytic cycles are complex, especially those with more than one metal ion. Part of nature’s catalyst for biological photosynthesis is a manganese cluster of four manganese ions that takes part in oxygen-evolving photosystem II, a catalytic cycle of five Si states (known as the Kok cycle,2 where i = 0–4). Controversy has arisen regarding the identity of the oxidation states of the manganese ions during the cycle, with the high-valent scheme (where, for example, S2 states are III, IV, IV, IV) and the low-valent scheme (where, for example, S2 states are III, III, III, IV) battling for supremacy.

It’s a war that sorely needs to be won, as only through understanding the electronic and geometric structure at each step of this catalytic cycle can researchers gain the vital information required to design efficient synthetic systems.

Pantazis’ study performs a detailed analysis of past literature, including breakthroughsin the topic3,4 by combining experimental and advanced quantum chemical techniques. ‘We realised that rather than focusing on a single aspect, the best way to resolve this confusion is to collect all available observations for all individual catalytic states and to use high level quantum chemical methods. The computer thus becomes a “meeting place” where all observations can be treated on an equal footing and with a common approach, regardless of how they were obtained or how they were initially interpreted.’

Pantazis acknowledges the potential controversy but feels the work offers ‘a definitive answer’ to the question of what the structures and oxidation states of the manganese ions are and how they change as the catalytic cycle progresses towards the final step of water oxidation. 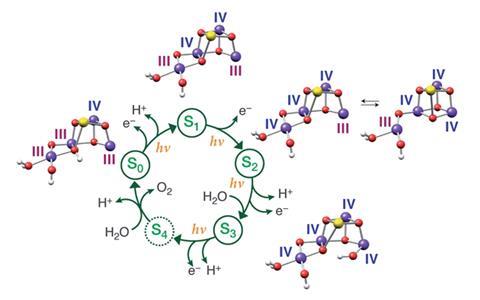 The Kok cycle. Models constructed according to the high-valent paradigm are in excellent agreement with experimental constraints

The results demonstrate that the entire S state cycle can only be accommodated within the high-valent scheme, due to the adoption of a single motif and protonation pattern that progresses smoothly from S0 (III, III, III, IV) to S3 (IV, IV, IV, IV), satisfying all experimental constraints and reproducing all observables. However, for the low-valent scheme, the researchers found it was impossible construct a consistent cycle for all of the S states.

Marcel Swart a computational chemist working in the field of biochemistry and biomedicine at the University of Girona in Spain supports the major findings of the study, noting a detailed understanding of the oxidation states was previously lacking. He says that the ‘combination of both theory and experiment and a systematic exploration makes this a complete and convincing story for the assignment of high-valent oxidation states along the catalytic cycle.’

But while Pantazis’ team believe their study is conclusive, it doesn’t settle the matter for everyone. Rob Stranger, a computational quantum chemist at the Australian National University, is a strong proponent of the low-valent scheme and while he has enormous regard for the group at Max Planck, he feels that even after publication of this study, ‘the argument for the low-valent model is by no means dead’.

He explains that ‘in general, other experimental data, mostly spectroscopic, can be interpreted more of less equally in both high-valent and low-valent paradigms. Through the analysis of structural, spectroscopic and computational data, this study makes the case for the high-valent model, but the lack of agreement with very recent x-ray crystal structures and its inability to rationalise the substrate water exchange kinetics, ensures the case for the low-valent model remains a viable alternative.’

Swart, despite his support, also feels there is further work to be done. ‘What remains to be explored’, he says ‘is how the enzyme produces dioxygen molecules in the S4 stage and returns back to the state S0’.

The team hope their study will provide the groundwork to answer such questions as a structure based interpretation of current and future data collected via diverse range of methods such as x-ray or EPR spectroscopies, mutation studies, crystallography and kinetics. Pantazis says that their model ‘seriously restricts the mechanistic possibilities for the final critical step, the formation of the O–O bond’.

Nevertheless, Swart sums up that ‘without any doubt, further unexpected findings will be coming along for this intriguing catalytic cycle.’