Pi-stacking better without the aromatics?

Scientists in the US have discovered that electrons confined to their double bonds can sometimes deliver stronger pi-stacking interactions than those roaming free in aromatic systems. The discovery could have a big impact on the design of receptors and supramolecular assemblies that rely on delocalised systems, they say. 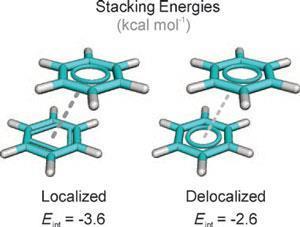 By analysing computed stacking energies that the team calculated for a range of pi-stacking systems, they concluded that stacking interactions involving non-aromatic polyenes are as favourable as, if not more favourable than, interactions among equivalent aromatic species. ’Employing such non-aromatic polyenes in supramolecular applications should be advantageous,’ Wheeler says.

’The Wheeler paper is a major step forward in understanding,’ says Paul von Rague’ Schleyer, an expert in computational studies of aromaticity at the University of Georgia in Athens, US. ’It builds on and extends our work on stacking interactions of three to nine membered rings2, which anticipated the present findings and conclusions at least to some degree,’ he adds.

David Sherrill, a leader in the field of computational studies of stacking interactions, from the Georgia Institute of Technology in Atlanta, US, says: ’What this paper seems to show is that in some cases pi-pi interactions can be enhanced by breaking the aromaticity to yield localised pi orbitals. This is a big surprise, and I think most of the community would not have expected that result,’ he says. ’It is commonly the case that when one is making some supramolecular systems, the presence of an aromatic interaction is considered the favourable recognition element, and it still is. But now, I think we can broaden our view to look at a wider variety of these recognition elements,’ he adds.

Even though this is a theoretical study, Wheeler explains that many research groups have devised ways of measuring stacking free energies experimentally. ’These molecular probes are typically used to measure the effect of substituent or heteroatoms on pi-stacking interactions,’ he says. ’I think that some of these probes could be adapted to directly measure the stacking free energy of two phenyl rings versus a phenyl ring and a non-aromatic cyclic polyene.’