For the first time, researchers have modified metal-organic frameworks (MOFs) to selectively capture large organic molecules. MOFs are already a hot topic with great potential for trapping hydrogen or carbon dioxide - but this research demonstrates that they may have important uses in other fields, such as creating sophisticated drug delivery systems or futuristic nanoelectronics.

’MOFs have previously been used either as sieves, where only the smallest molecules can get into the crystal - or as a sponge, where large amounts of gas are absorbed,’ says Fraser Stoddart at Northwestern University, US. ’In this case we have developed a true lock-and-key mechanism - as seen in biology - where a specific molecule is recognised and held in the crystal,’ Stoddard says. The research is the culmination of a long collaboration between Stoddart and Omar Yaghi, based at the Universityof California in Los Angeles, US.

MOFs are made by joining up metal oxide clusters (called hubs), with linking organic molecules (called struts). This results in a porous cubic crystalline structure with extremely low density. To give the system selectivity, Yaghi and Stoddart modified the MOF struts by adding ring-shaped polyethers.

These looped macrocycles fill out the inside of the MOF pores - allowing only molecules of a certain shape and size to fit comfortably. In this case, the 34- and 36-membered rings act as an effective ’docking site’ for paraquat, a herbicide that consists of two linked pyridinium rings. 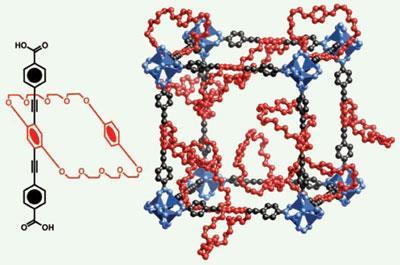 By adding ring-shaped molecules to the struts, only specific molecules can fit into the MOF pores

Jeffrey Long, an expert on MOFs at the University of California, Berkeley, US, is impressed by the study. ’This work provides a beautiful demonstration of how a new level of complexity can be built into porous MOF structures through incorporation of dynamic supramolecular receptors,’ he says.

But this research is only the beginning and serves as a demonstration for what is to come, Stoddart notes. There is great scope to modify many aspects of MOFs to create systems with a wide range of functionality - from cleaning water to miniaturising electrical components.

’If a receptor can be fashioned for a particular drug and added to the struts, you would have a world-beater in terms of a drug delivery system,’ Stoddart told Chemistry World. ’Another possibility is to create switches that are periodically arranged in three dimensions - creating the densest possible memory that you could make.’