Scientists in China have developed an electrode for lithium-sulfur batteries using pig bones as a cheap and renewable carbon source.

Lithium-sulfur batteries are promising rechargeable batteries because of their high energy storage capacity and low cost, but their use has been hindered by their short life cycle and loss of active sulfur through electrochemical reactions in the battery. Porous carbon materials can help as the sulfur is trapped in the pores, preventing it reacting further, but their preparation involves many synthetic steps. 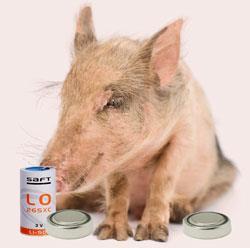 Pig bones are a good source of porous carbon, preventing the need for several synthetic reactions

Now, Yaqin Huang and his team from the Beijing University of Chemical Technology have discovered a porous carbon source in pig bone. To make the porous carbon, Huang’s team crushed the bones to a powder and heated them to 450?C to carbonise them. Bones consist of an organic component, mostly collagen, and apatite crystals - bone minerals made of calcium - dispersed in the collagen that act as natural templates to make the porous structure. The team activated the carbon by adding potassium hydroxide, which increases the surface area, and heating the mixture.

They investigated the effects of activation temperature on the new carbon/sulfur cathode and found that the carbon prepared at 850?C had the highest surface area, largest pore volume and best conductivity and that it maintained its structure up to 950?C. They also found that the cycling performance was higher than that of normal cathodes with compact structures. ’The development of rechargeable batteries that can be coupled to renewable sources is becoming more important for clean and efficient energy storage,’ explains Huang.

’Since the activation temperature in this process is very high, the real challenge will be synthesising a highly porous carbon material at relatively ambient conditions,’ says Leela Mohana Reddy, an expert in lithium ion batteries and supercapacitors at Rice University, Texas, US. However, he adds that ’pig bone based porous carbon has great potential in the development of novel cathode materials for building the next generation of energy storage devices.’