Scientists have created a surface so slippery that oil, jam and even insects just slide straight off it

By mimicking the leaves of a carnivorous tropical plant, US scientists have developed a surface so slippery that everything slides off: water, oil, blood, ice, jam and even ants. This kind of ’omniphobic’ surface could be used to produce graffiti-repelling walls, self-cleaning windows and pipes that transport fluids easily and quickly. 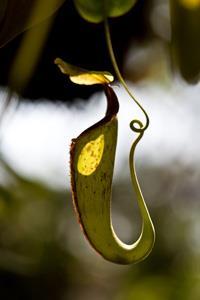 Pitcher plants supplement their meagre diets with insects. They capture them by creating an extremely slippery surface using microscopic ridges bathed in nectar

Up to now, scientists developing highly slippery surfaces have mainly taken inspiration from the leaves of the lotus flower. The surface of these leaves are covered in microscopic ridges, coated in a water-repellent waxy substance, which traps a layer of air between the ridges. As a consequence, water falling onto the leaf doesn’t spread out, but rather forms individual droplets that simply roll off.

The reason for this is that between them the waxy substance and layer of trapped air prevent the droplets from flowing into the channels between the ridges, meaning they can only perch on top. This has been likened to an Indian fakir lying on top of a bed of nails.

Several research groups have managed to produce synthetic surfaces with similar structures and these have proven highly slippery, but only for water. The problem with this approach is that it only really works with liquids with a high surface tension like water. Liquids with a low surface tension, such as oil, can’t form stable droplets on the layer of air and so still flow between the ridges, staining the surface.

The Nepenthes pitcher plant, an insect-eating plant found throughout south-east Asia, takes a slightly different approach to the lotus plant. The surface of this plant’s leaves are also covered in microscopic ridges, but these ridges trap a layer of liquid nectar between them rather than a layer of air. The effect is much the same, though, and not just for water. Any insect that lands on the leaves can’t gain a purchase, quickly sliding off and falling into pitcher-shaped structures where it is digested.

A team of US chemists, led by Joanna Aizenberg at Harvard University in Cambridge, has now become the first to produce synthetic surfaces with a similar structure to the pitcher plant leaf, dubbed slippery liquid-infused porous surfaces (Slips). ’This really is a new direction,’ says Steven Bell, director of innovative molecular materials at Queen’s University Belfast, UK. ’Many of us have been working on improving the durability of "lotus effect" materials but this now offers us an alternative way to try to reach the same objectives.’

Aizenberg and her team took two nanostructured materials - an array of 300nm-wide water-repellent nanoposts and a random network of Teflon-coated nanofibres - and then soaked them in a fluorine-rich liquid, which formed a layer between the nanostructures. Not only did this layer prevent water from flowing between the nanostructures, but it also stopped liquids with low surface tension, such as oil and blood. All these liquids formed droplets that slid off when the materials were tilted by just 5?.

And that’s just the start. Not only are sticky substances such as jam unable to adhere to the Slips, but ants also quickly slide off them. Another major advantage is that, unlike lotus leaf mimics, the Slips can withstand damage to their surfaces, remaining just as slippery. This is because the liquid layer simply flows over any physical damage covering it up.

Also, unlike lotus leaf mimics, Slips are optically transparent and can remain slippery even under the high pressures generated in pipes or during driving rain. This opens up a wide range of potential applications for the materials.

’We are exploring the use of Slips as energy-efficient materials for refrigeration and fuel transport; as stain-resistant coatings for optical devices and anti-graffiti surfaces; and as anti-fouling materials for medical devices and marine vessels,’ author Tak-Sing Wong at Harvard University told Chemistry World.