Study warns that chemicals from plasticware could be compromising biological studies

Chemicals leaching from plastic lab equipment could be compromising the accuracy of biological studies, warn Canadian researchers. Clear labelling is needed to help scientists avoid plastics that could distort their results, say Andrew Holt at the University of Alberta and colleagues.

Cheap and disposable plasticware, such as precision pipette tips or micro-reaction vials, are widely used by chemists and biologists. However, additives used to manufacture plastics can leach out of the final product - as the recent concern over bisphenol A, the toxic compound that can leach from plastic baby bottles, has highlighted.

’There is a general acceptance among scientists that the use of plastics in some experiments reduces the likelihood of experimental success,’ Holt told Chemistry World, ’although few reports indicate that compounds leaching from plastics are responsible.’

Holt first became suspicious that compounds were leaching from polypropylene reaction tubes in 2006, when investigating how ammonium chloride interacts with an enzyme linked to Parkinson’s disease. The team found that ammonium chloride only interacted weakly, but the interaction seemed to persist even when the reagents were diluted greatly. 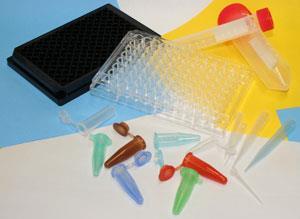 Could plastics be wrecking your reactions?

Suspecting their labware, the team washed clean plastic vials and tubing in water, methanol and DMSO - and identified two chemicals that had dissolved in the wash solvents. Both of these turned out to be additives used in the manufacture of the plastic: the disinfectant DiHEMDA, and the lubricant oleamide. Further testing showed both compounds were inhibitors of the same Parkinson’s enzyme.

’We found that the amounts of chemicals leached varied between manufacturers -and even between differently-sized vials,’ says Holt, which indicates that different manufacturing processes may be responsible.

While debate continues over bisphenol A’s potential threat to human health, the chemicals Holt discovered leaching from plastics are unlikely to cause similar concern, he says. ’In this case, I suspect the quantities involved are not high enough to pose any risk to humans,’ says Holt, because the chemicals are only present in micromole quantities that could only affect specific reactions performed at low concentration.

Due to the nature of processes used to make plastics, Holt believes that there may be no ’universally safe’ plastic - and the best option is to be aware of any chemicals that might be present.

’This is a useful study that points out the need to be sure of the components of the plasticware in use,’ says Robin Hiley, a  pharmacologist at the University of Cambridge. ’Plasticware is widely used for preparation of solutions and storage in freezers, and the issue of long term leaching might be a real one.’

However, using glassware instead would not be a perfect remedy to the problem, Hiley adds. ’Many agents can stick to glass through cleaning, which could also distort results at low concentration,’ he says. ’In short - dissolver beware!’