It might not be Deep Blue, the chess-playing supercomputer, but US researchers have shown that a solution of biological molecules can be taught to play any strategy of a simple board game against a human opponent and never lose. The programmable biomolecular ’automaton’ demonstrates how molecules can behave in a way that extends beyond their ’hard-wired’ chemical function, says Milan Stojanovic of Columbia University, New York, who lead the research team.

The solution of enzymes is divided into four wells - the playing board as it were. The human player selects a square on the board by adding the corresponding input oligonucleotide to all wells: input molecule 1 indicates that the player is choosing square 1, input 2 square 2 and so on. 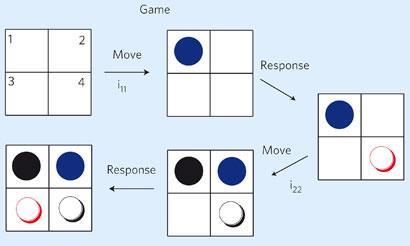 In this way, through a ’training session’ all possible permutations can be covered so that the automaton is programmed to respond to any combination of moves. The total number of possible strategies dictating how to respond to the human move is 34, or 81.

Stojanovic says that the idea of the work is not to make a computer that can compete with silicon, but rather to explore how biological molecules can be programmable, multifunctional and adaptable.

Experts in the field are impressed by the work. Erik Winfree of the California Institute of Technology in the US woks on molecular programming and says, ’It’s the first serious attempt to construct an artificial chemical system that learns from examples and I’m sure it will stimulate a lot of productive controversy and inspire a whole line of research.’