Chemical mapping could help unpick the biology of extinct animals 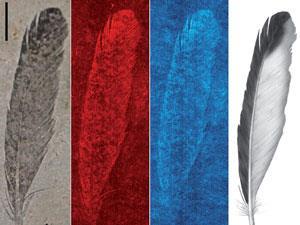 (Lâ€“R) Single feather of Archaeopteryx, SRS-XRF images of Cu and Ni, and an artistâ€™s reproduction

An international team of scientists has used synchrotron-based imaging techniques to chemically map the feather colours of a 150 million-year-old bird. The study reveals that the dinosaur had feathers which were light in colour with a dark edge and tip, rather than all black as previously thought.

Since its initial discovery in the limestone beds of southern Germany in 1861, the winged dinosaur, Archaeopteryx lithographica, has played a central role in the discussion of avian evolution and the origins of feathers and flight. As pigmentation has implications in a range of behaviours such as selecting mates, communication and camouflage, this newly revealed plumage pattern may help in understanding the evolutionary selection processes occurring 150 million years ago.

Previous studies investigating the fossilised structures of melanin-containing organelles called melanosomes, had suggested that the pigment in Archaeopteryx feathers was black. However, this approach was restricted to a small fraction of the feather surface and could only predict colour at discrete locations. Now, a team from The University of Manchester, UK, and the US Department of Energy’s SLAC National Accelerator Laboratory have used synchrotron rapid scanning x-ray fluorescence (SRS-XRF) on three key specimens of this iconic fossil to spatially resolve the subtle variations in pigmentation of a complete Archaeopteryx feather.

Eumelanin is the major melanin pigment in animal tissues and is responsible for dark, black or brown hues in the hair, skin and eyes of many modern species, including humans. This light-absorbing polymer chelates to a number of biologically important metal ions. The team found previously that the distributions of trace metal ions such as copper can be used to generate a chemical map of the eumelanin concentration and distribution in fossilised feathers to predict feather colour. When the team focused their synchrotron x-rays on fossilised feathers of Archaeopteryx, the results showed elevated levels of Cu in the outer vane and tip, revealing that Archaeopteryx had patterned plumage.

‘This is the most refined, non-destructive technique we’ve ever been able to employ, allowing us to map the elemental inventory of fossils with astounding sensitivity and resolution’ says Phillip Manning, the lead paleontologist on the team. ‘It gives us the opportunity to access fossils such as Archaeopteryx which traditionally cannot be studied because they are so rare and delicate that they cannot have any destructive chemical analysis techniques applied to them.’

‘The work provides a more complete picture of feather coloration patterns of one of the earliest fossil birds’ says Darla Zelenitsky, a dinosaur researcher at the University of Calgary, Canada. ‘These techniques have the potential to reveal changes in colour patterning along entire feathers over a complete animal to help us better understand the plumage colors and patterning in individual species of feathered dinosaurs and birds, and could eventually provide insight into why such features may have initially evolved.’

Manning adds that ‘since we have found that within fossils there are specific trace metal biomarkers that correlate with precise biosynthetic pathways, we can now start to unpick the biology of life in extinct animals. Fossils thought to have been well studied and stored away will need to be brought back out of the museum.’