Plutonium travels through groundwater by hitching a ride on tiny colloid particles.

The radioactive element plutonium can travel through groundwater despite its low solubility: it hitches a ride on tiny colloid particles in the water.

Russian, American and French researchers have imaged plutonium clinging to mineral colloids around four kilometres away from a contaminated lake near a nuclear waste processing plant in Mayak, Russia. 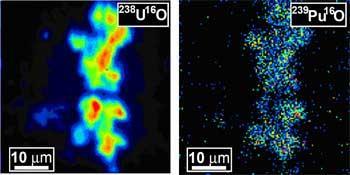 Elemental maps of trace U and Pu on amorphous Fe hydroxide colloids from groundwater 3.2 km from the contaminated source, Lake Karachai, in Mayak, Russia. (The contrast of these maps has been enhanced to show the distribution clearly; intensity does not correspond to concentration of the different elements.)

The team’s findings support earlier studies of radionuclide migration through water. A US group led by geochemist Annie Kersting reported in 1999 that plutonium, and other radioactive isotopes, might use colloids to travel unsuspected distances from underground nuclear testing sites in Nevada. It wasn’t clear then exactly how this happened.

Now, says co-author Rodney Ewing, from the University of Michigan, US, researchers have identified the colloids responsible, at least at Mayak. They used high-resolution microscopy to identify iron oxide phases carrying plutonium from Lake Karachai, contaminated by a nuclear fuel reprocessing spill half a century ago.

The small colloids are ubiquitous to groundwater, Ewing explained. They form weak bonds with amorphous plutonium hydroxide, which has limited solubility in water. Ewing hopes the team’s findings will settle some debates about the importance of colloids as a transport mechanism for plutonium and other actinide elements. Some scientists suggest that organic matter, dissolved in water, might also offer plutonium a useful taxi service.

Little can be done about plutonium’s spread around Mayak and similarly contaminated sites. But plans to store nuclear waste underground may need to consider the possibility of colloidal transport.

But the US waste programme doesn’t propose any clay barrier, said McCombie. The US plan is to store nuclear waste at Yucca Mountain, Nevada, in containers which would last for thousands of years, while water is diverted round storage tunnels.

The recent recommendations from the Committee on Radioactive Waste Management should prompt a renewed research effort to tackle the problems of nuclear waste storage.

Radioactive waste should be stored deep underground at sites where local communities have had the opportunity to participate in, and even withdraw from, the planning process.

Many countries consider that the best way to dispose of nuclear waste in the long term is to bury it deep underground. Simon Morgan looks at how this could be done