A device for amplifying DNA that runs on two-AA batteries and costs about £5 to make.

Scientists in the US report being one step closer to designing a miniaturised, portable PCR machine that could be used for applications such as point-of-care diagnostics.

The polymerase chain reaction (PCR) is a technique for copying specific DNA sequences. The three basic steps in the process - splitting a DNA template into its two single strands (denaturation); adding short segments of complementary DNA called primers to initiate replication of a chosen DNA sequence (annealing); and adding DNA polymerase to synthesise the complementary strand (extension) - are repeated again and again to amplify the sequence. Each of these steps occurs optimally at a different temperature, so heating and cooling is carried out with an instrument called a thermocycler.

Standard thermocyclers are generally slow and consume a great deal of energy. A new device described in a forthcoming issue of Angewandte Chemie amplifies DNA by PCR but costs about $10 (?5) to make, is battery operated, and can fit in a pocket. 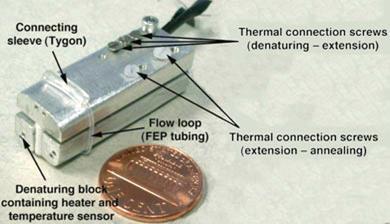 ’It seems too simple to even work,’ said project leader Victor Ugaz, a chemical engineer at Texas A&M University. ’But it works quite well,’ he told Chemistry World. ’You can get fast performance with a miniature device while using the same reaction sizes you would normally use.’

In previous work1, Ugaz and colleagues showed how a temperature gradient could be used to create a circulatory flow ideal for carrying out chemical reactions that require thermal cycling, such as the PCR. One limitation of their lava-lamp-like device was controlling the amount of time the PCR reagents were in each temperature zone.

In the latest study2, Ugaz’s team attempted to fix this problem by creating a loop system with a unidirectional flow. The device consists of three aluminium blocks held together by screws. When one block is heated and maintained at the denaturing temperature, the screws, which have different thermal conductivities, transfer heat to the other blocks, which attain the temperatures needed for annealing or extension. PCR reagents are added to a tube, which loops around the blocks to form a rectangular path. Adjusting the size of the blocks and the length of the tubing optimizes the amount of time the reagents are at a certain temperature.

’It’s very clever,’ said Kevin Dorfman, a chemical engineer at the University of Minnesota, Minneapolis-St. Paul. ’This is really significant proof that a cheap, simple, and portable PCR device is possible.’

The next step for Ugaz and colleagues is to show that their device can be used to detect PCR products in real time rather than by gel electrophoresis. A self-contained amplification and detection system is ideal for the rapid identification of infectious diseases in locations with limited access to laboratories.