A gel that could prevent the painful and disfiguring contractions of skin grafts used to treat burns victims has been developed by UK scientists.

When skin is irreparably damaged by burns, skin taken from other areas of the patient’s body - or created by tissue-engineering - is grafted onto the burned area. Although grafts often heal successfully, the skin shrinks significantly in nearly a third of patients. The process, which can occur within just six months of the graft, is painful and disabling, and particularly common in children.

Karima Bertal and colleagues at the University of Sheffield have now developed an enzyme-inhibiting drug which can halve this contraction, and loaded it into a biocompatible polymer gel to smear onto the graft. Bertal presented the group’s preliminary results at the RSC Biomaterials Chemistry Interest Group meeting in Manchester, UK, on 15 January.

Sheila MacNeil, the Sheffield scientist who led the study, told Chemistry World  that there is no pharmacological treatment for this condition. ’Our lab makes tissue-engineered grafts and, at first, we saw this contraction as a major problem. But we then realised that our engineered skin grafts actually made an ideal model to study it.’

The whole process that causes contraction is poorly understood, and currently the only accepted treatment is to have the patient wear pressure garments - extremely tight clothing that pushes down on the dermis to prevent it forming bumps of contracted tissue.

But in studying their skin grafts, the group discovered a role for an enzyme called lysyl oxidase. ’This initiates cross-linking between collagen fibres in the deep dermal layer of the skin, producing contraction,’ MacNeil explained.

APN). ’But we didn’t want to inhibit the cross-linking of collagen throughout the body - we needed to find a way to apply it topically, which is where the idea of using a polymer gel came from,’ said MacNeil. 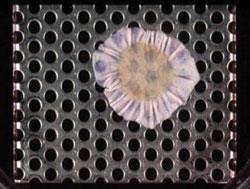 The team worked with polymer chemist Steve Armes, also at the University of Sheffield, to develop the gel. The

APN is suspended in a triblock copolymer, made from HPMA (2-hydroxypropyl methacrylate), MPC (2-(methacryloyloxy)ethyl phosphorylcholine), and disulfide-linked MPC. Armes had developed the polymer as part of an ongoing collaboration with Farnham-based healthcare company Biocompatibles UK.

’Our polymer gel is well tolerated by the skin and releases the drug in a controlled manner over about 48 hours,’ Bertal told Chemistry World. ’In our tests with

APN, the control grafts contract to about 60 per cent of their original size - but with the drug treatment, they only contract down to 80 per cent.’

Suwan Jayasinghe from Imperial College in London, who researches biocompatible polymers, said that the ’biopolymers developed by the MacNeil’s group have some unique features. If these advanced biopolymers show excellent cell compatibility . they would not only be useful in wound healing, but could extend to a wide range of biomedical applications,’ he said.

’We’re just beginning to get results from these in vitro experiments with the gel,’ added MacNeil. ’But they look promising and, if they’re successful, we would like to move into the clinic.’