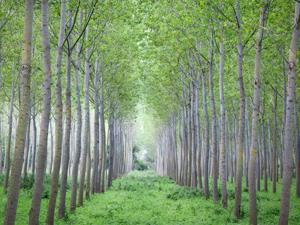 Biofuels have long been suggested as part of the solution to curbing greenhouse gas emissions and our reliance on oil but a new study is seeking to ease the bottleneck in them being adopted on a global scale by clarifying controversies surrounding their overall environmental sustainability.

First generation bioethanol is made from food crops but its benefits are limited as the fuel cannot be produced sustainably on a large scale without threatening food supplies. Second generation bioethanol, though, is produced from non-food feedstocks such as woody plants and waste paper products. However, the process still uses land that could be used to grow food crops.

Poplars have been singled out as an exemplar bioethanol feedstock by the EU: ‘They are ideal for producing second generation biofuels due to their fast growth cycle and the well documented information on their genome – which can be modified,’ explains Richard Murphy from the University of Surrey, UK, who led the study. The research was conducted as part of the Energy Poplar project, funded by the European Commission’s Seventh Framework Programme – the predecessor to the Horizon 2020 EU Research and Innovation programme.

Murphy’s team evaluated poplar-derived bioethanol by modelling its whole life cycle from growing and harvesting poplar feedstocks to its end use in petrol blends. Computer simulation packages created hypothetical scenarios based on theoretical assumptions and data from the literature.

The life-cycle assessment (LCA) revealed that hypothetical genetically-modified poplar led to bioethanol products with environmental savings of 80% or more over petrol in categories such as global warming potential (GWP100), ozone depletion potential and photochemical ozone creation potential.  Advanced poplar clones simulated to have lower lignin content in their cell wall would mean there was no need to pre-treat the biomass at high pressures and temperatures as sugars would be easier to extract to make ethanol.

Another outcome was that including soil carbon accumulation data improved GWP100 savings by 80–98%. A stoichiometric carbon counting approach determined soil carbon accumulation during the poplar plantation stage due to leaf litter and roots left behind in the soil. This was offset against carbon emissions from bioethanol production and so incurred a net negative GWP100.

Agrobiotechnology expert Florent Allais of AgroParis Tech in France is enthusiastic about the impact and breadth of the study. ‘This work is crucial and provides strong scientific arguments to iron out the controversy regarding the overall environmental sustainability of second generation bioethanol.’

This work will guide the European Commission’s policies regarding sustainable options for producing poplar-derived bioethanol and hopefully direct future research in this area.